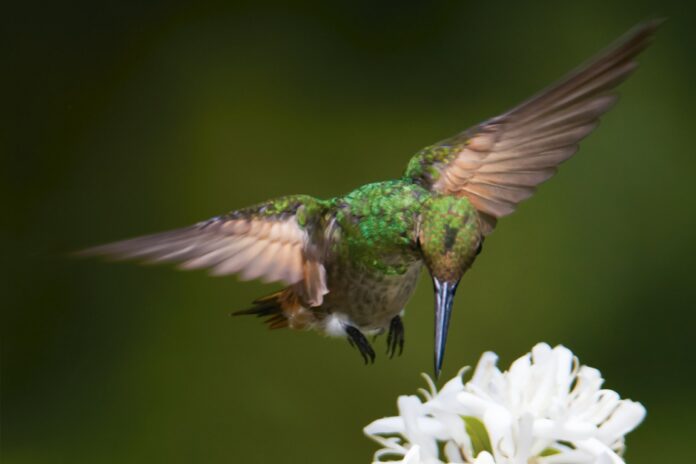 Hummingbirds, this beautiful and mythical Mexican species, is on the verge of extinction due to the practice of the so-called love ties (Traps)

Something terrible is happening in Mexico, hummingbirds are under threat and on the verge of extinction due to illegal hunting. Most of the specimens caught in the wild are traded for witchcraft and love potions. These practices are bringing a beautiful and mythical Mexican species to the brink of extinction.

Key piece in the ecosystem

Once again we humans wreak havoc on the rest of the species. The predation of the hummingbird is very sad and alarming because this small bird plays an extremely important role in the ecosystem as a pollinator.

They are native to America, and there are 330 species, of which 58 belong to Mexican territory. A considerable part, 17 of the varieties, reproduce during the summer in Canada and the States, to later return to Mexico during the winter.

It is a unique species of its kind, it can flap its wings 200 times per second. Their diet is based on the nectar they extract from flowers. And your job as a pollinator is to transport pollen (a male plant cell) to a female plant. In this way, hummingbirds are fundamental agents in the sexual reproduction of plants.

The end of a species for love?

Unfortunately, hummingbirds are captured and extracted from their ecosystems to be illegally traded in different markets or esoteric businesses in CDMX. In recent years, their persecution has increased because they are attributed magical characteristics in love. The beautiful birds are sold cost between 300 and 400 pesos.

Hummingbirds are rarely sold alive, in most cases, they die as they are extremely delicate birds. At the moment of being captured, they die immediately, since they require food every 10 minutes, since they consume half of their weight and their energy in their rapid movements and flaps.

People who traffic in hummingbirds use them in love rituals; they put a male and a female in a red sack, pour honey over them, and close the sack to seal the love spell.

Unfortunately, these practices are not only carried out in Mexico but also outside the country. A few years ago, a package full of dead hummingbirds was found at United States customs. The investigations clarified that the birds were sent to be used in witchcraft practices and that they could be requested by an Internet page.

These beautiful and colorful birds have been admired since pre-Columbian times. The Mayans considered them sacred birds, made to be free ( x ts’ unu’um ). It was believed that if someone dared to cage or capture a hummingbird, they would be punished by the gods.

Besides being sacred, they are carriers of good wishes and good luck. That is why we must protect hummingbirds, as they help the ecosystem and bring us messages from the people we love. However, the little messengers cannot fulfill their beautiful mission if they continue to be pursued and exterminated.

Mexico, with 18 of the 50 most dangerous cities in the world

Searching for Peyote in the Mexico desert (VIDEO)