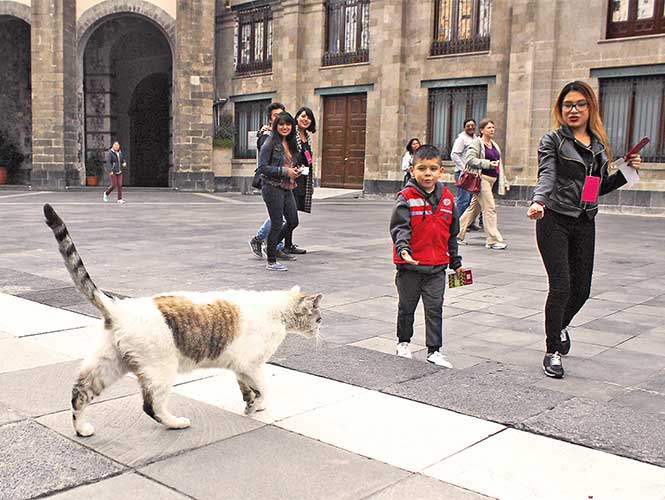 A tweet, a hashtag and the moving mission to rescue the cats from the National Palace are the key to this story.

#ConLosGatosNo, continues to be an expression of struggle in defense of the kittens.

The history of the National Palace emerges everywhere, through the large murals of Diego Rivera on its walls, from the history that is talked about daily, although, in fact, the site itself is full of peculiar stories such as the history of the cats. who live in the Palace.

In 2009, this story became popular and went viral with the hashtag #ConLosGatosNo, in fact, it became a trending topic when a citizen who confirmed that she was his caregiver said:

“Unfortunately, the new administration at @SHCP_mx, specifically the people from Conservaduría [a department of the institution], does not want the cats to be there,” said user Carmen Hernández in her account.

That thread received more than 8,400 retweets and an equal amount of likes within the first six hours of its publication. The author is María del Carmen Hernández, a 36-year-old economist, who told Verne that she has been feeding and procuring a score of cats that live in the National Palace for more than three years. “I worked in the Ministry of Finance from 2014 to 2016, and I bring food to the kittens since I realized they lived there,” the capital city details by phone.

Hernández relates that she, along with three other people who have worked in the building, have been buying pet food for several years, since no public body takes care of them. “When I started to see them they were given their food in plastic cans, it was very poor quality food,” he says. “We started giving them cans of tuna and croquettes,” he says. The capital city indicates that it spends about 1,000 pesos a month (about $ 52) on food for the felines.

At that time, the economist received the news that the cats could be euthanized by a government order. “Some friends told me that they continue to work in the Treasury,” he says. “I thought it was a joke in bad taste until messages kept coming that they were going to sleep,” he says. But was it just a rumor? or maybe not, due to the virtualization of that first tweet?

In fact, the Twitter account of the Ministry of Finance responded to the user with two messages about the care of cats: “In collaboration with the Faculty of Veterinary Medicine and Zootechnics of @UNAM_Mx @FMVZUNAM [of the National Autonomous University of Mexico], months ago we began a comprehensive care program for responsible care of the cats that live in #PalacioNacional. #ConLosGatosNo, “says one of the tweets.

And in fact, there was a whole campaign to protect and care for cats. The uproar was so great that representatives of the Treasury and UNAM sent the Verne newspaper information about the assistance program for the felines that inhabit the enclosure. They were evaluated, laboratory tests to determine their state of health and “therapeutic measures” and disease prevention were implemented.

The names of the most popular feline tenants are:

In memory of Gruñon or Gandalla, who passed away in July 2019.

On May 11th, 118 schools will go back to face-to-face classes in Guanajuato