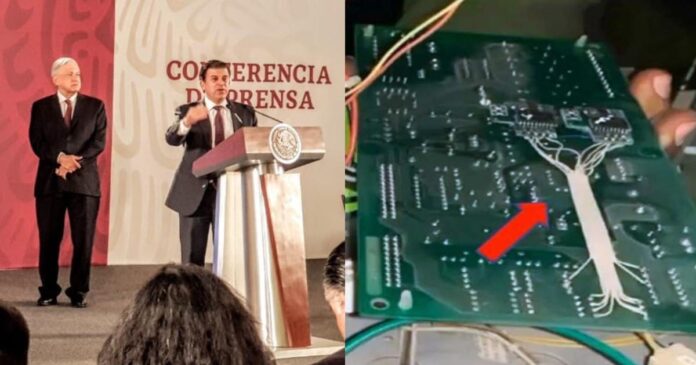 The Federal Consumer Prosecutor’s Office (Profeco) revealed that during the past week, in the verifications carried out by the agency, they detected a new type of device inside a gas station, which allows controlling the flow of the pump and altering the liters it sells remotely and thus steals from consumers.

In the morning conference of President Andrés Manuel López Obrador, the head of Profeco, Ricardo Sheffield Padilla, pointed out that this new device is much more sophisticated and that they will fight, and even carry out the necessary reforms so that whoever performs this type of practices loses the concession of the gas station automatically.

“ We discovered in a gas station in Huetamo, Michoacán, the first 21st-century version of the device, this new device we had not found before. It is a device that allows anyone to control the flow of the pump and alter it remotely, the person may be in Tijuana and the gas station in Mérida, and be able to alter the amount of gasoline, “he said.

Regarding the checks carried out by the agency, he said last week attended through the app of Litro x Litro 222 complaints through formal visits 178, of which seven stations showed irregularities.

“María Soledad Cuenca Merlo, in Atlzayanca, Tlaxcala, was not allowed to be verified; Cristina Rico in Villagrán, Guanajuato; and five stations in Mérida, Yucatán, we are going to investigate further, because it seems that there they are reaching an agreement to prevent the action of Profeco ”, he said.

The attorney pointed out that as of March 5, the Mexican oil mix was 62.40 dollars per barrel, the average diesel in the entire country during the past week was 21.22 pesos; 21.52 cents for the premium and 20.24 pesos for the regular one.

The Profeco representative pointed out that the brands that sell the most expensive fuel on average are Redco, Chevron, and Fullgas; while the cheapest in the country are G500, Exxon Mobil, and Orsan.