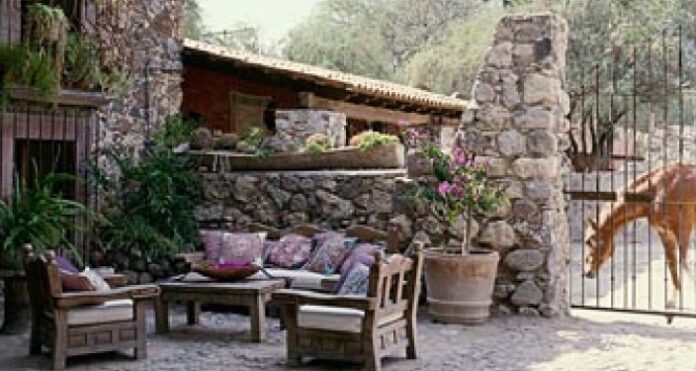 It is great fun to explore the ancient haciendas around town, from our oldest, Tirado, to the horror-movie-featured ruins of the biggest hacienda home in the Americas, Hacienda Jaral de Berrio.

There are some even closer to centro including one along the rail road tracks by the train station.  However, like the records for the hacienda in the nearby village of La Palmar, documentation on this area was long ago destroyed so it is difficult to know what role, exactly, the hacienda once played.

The current owner calls the hacienda “the walls” because when she first bought the property it was mostly in ruins just featuring walls but doesn’t know what the hacienda was originally called.  Nobody else does either.  Given the location and features it likely was another hacienda’s outpost for livestock.  Much like the hacienda in Alcocer (behind the mall) was for burros on the Silver Route, so travelers could switch out their mules for better rested ones.

It is obvious to realize the hacienda once expanded its current location as there are ruins of a storage center you can view in the middle of the rail road tracks.

Archeologists have studied the property noting the tunnels underneath it running to the Parroquia as many did during the Inquisition of Mexico from 1520 to 1820.  Obviously coming up for air this far outside of town led many that claimed sanctuary at the Parroquia a way out of town.

Along with long-ago horse stables the hacienda features a chapel, that judging by the engraved in stone art, was in honor of St. Juan Diego.  An odd choice since he didn’t become a saint until the 1990s as Guadalupe’s indigenous aide-de-camp helping her bring the new faith to the Americas.

The current owner states a wall has the date 1820 carved into it but doesn’t know if it was just that wall from that era.  She claims many executions happened on the property for either the Mexican War of Independence, or the Cristero War.  Since they occurred a century apart, the claim is vague, at best.

Among these oddities the hacienda features and interesting altar to the Martins.  Normally an altar along a roadside is for a particular saint, often St. Jude, patron of Lost Causes.  Here Inquisition-era St. Martin, patron saint of Mexico and mixed-raced people, is honored with Gladiator-era St. Martin, patron saint of cowboys and those that rely on the kindness of strangers.  Between the two, they cover a wide array of issues.

You can purchase this slice of San Miguel de Allende history that has been off and on the market for about a decade at 1.2 million USD.  It’s pretty but to sell a property for a million outside of centro rarely occurs more than once a year.  Add in a location next to the full throttle of trains passing at night, flooding during the rainy months and located in the middle of an economically-weak neighborhood explains why it has been for sale for so long.

Still, a fun place to gambol by and wonder what happened here and when, which can be said for much of San Miguel de Allende!