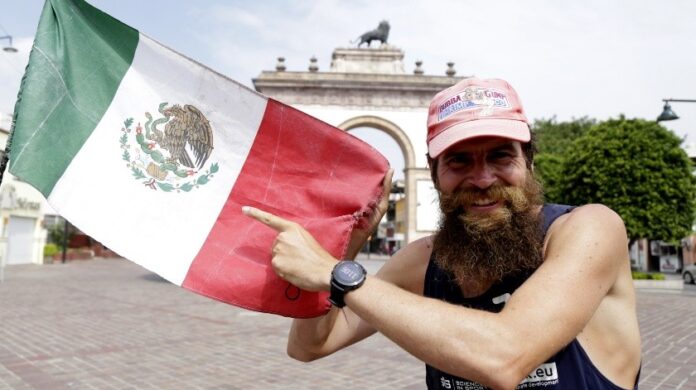 The ‘Forrest Gump of real life’ arrives in León and then goes to Silao, Guanajuato, and San Miguel de Allende; ensures that no country has received it like Mexico

León, Guanajuato.- Jonas Deichmann, the German athlete better known as the ‘Forrest Gump of real life’  for his enthusiasm to go around the world by bicycle, swimming, and running, passed through León this Wednesday and then headed to Silao, Guanajuato, and San Miguel de Allende.

Originally from Munich, Germany, the 34-year-old triathlete enthusiastically expressed that of the more than 100 countries he has visited since last September 26, when he began his 40,000-kilometer journey around the world, none have received him like in Mexico.

“I started setting world records by bike five years ago, I went from Alaska to Argentina by bike and from Norway to southern Africa, and then the idea of ​​doing something different came along, and all adventurers have the dream of going around the world. world, it is logical, it is the greatest thing that can be done and nobody has done it as a triathlon “, spoke the ‘Forrest Gump of real life’.

“Mexico is fantastic, with very diverse landscapes, the Baja California desert and the beaches, the tropical jungle in Sinaloa, the Durango mountain range. But the best thing about this country is the people because they are so kind, hospitable, and very happy, and that is contagious, “he added.

He shared that he will travel through Mexico running and pulling behind him a cart that he ties to his waist, the same where he keeps his belongings and which, he said with a laugh, is his wife when he confesses that he is not married and has no children.

Until yesterday, the triathlete had spent 54 days running around the country, starting in Tijuana and ending in Cancun, having traveled a distance of just over five thousand kilometers, then going to Portugal and finally returning to Munich by bicycle where he plans to finish the record by next November.

On his tour of Guanajuato,  Jonas passed through León and then went to Silao, the state capital, and San Miguel de Allende.

The journey began in Munich where he left by bicycle to reach Croatia, from there he swam along the coast to Montenegro, to resume the route by bicycle to cross Europe and Asia until he reached the Chinese coast, where he took a sailboat to cross the Pacific Ocean to San Francisco, United States.

The next step is to race through North America and Mexico to reach Portugal, where again by sailboat you will cross the Atlantic Ocean to arrive in Lisbon and return by bike to Munich.

He confesses to having felt fear in the open sea

The German adventurer who visits Mexico for the second time confessed that in his long walk he has also felt fear when he has to swim in the open sea or when he is running cars and trucks pass very close to him, as he recognized that it is very dangerous.

In November I will finish the trip around the world, the goal in Mexico is 120 marathons in 120 days, this one in León is 56, in total the triathlon lasts 14 months, today is day number 319.