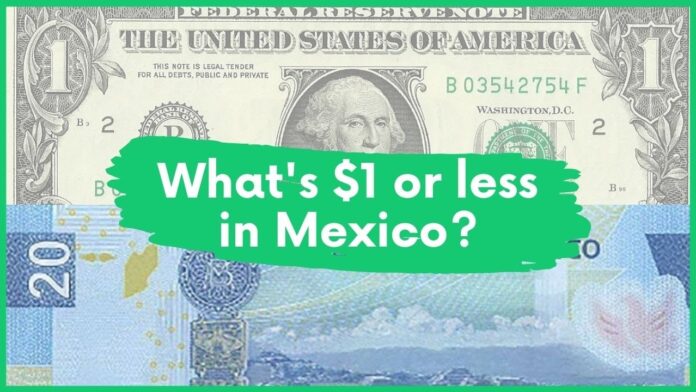 What can you get for a dollar in Mexico? Or less than that? Quite a lot it turns out.

In looking through some old posts of mine that are getting out-of-date, I found one from 2009 on what you could get for a dollar or less in Mexico City. I had been on a travel writing research trip there before I ever moved to Mexico and was seeing bargains all around me. The peso had spiked to 13.5 to the dollar, up from its usual (back then) range of 10 to 12. Now it’s even cheaper.

At the end of each country section in The World’s Cheapest Destinations, I have a paragraph on “what you can get for a buck or less.” It’s not meant to be comprehensive, but just a sampling of what one U.S. dollar will buy you in that destination. It’s something people seem to like a lot, so I thought I’d give an update on what that gets you in Mexico now, in 2021 as the peso is often in the range of 19 or 20 to the dollar instead.

A note for the photos: Mexicans often use the dollar sign in front of peso prices, so if you see that your Mexican breakfast in a restaurant is listed at $80 on the menu, that’s 80 pesos, or $4. And it’ll probably be four of the best dollars you ever spent.

Prices are relatively uniform in Mexico when it comes to grocery stores and chain restaurants, but as with any country, they can vary quite a bit for everything else when you compare urban to rural or beach resort area to the interior. In general, you’ll see better prices for food, drink, rent/hotel, and services when you get away from the very largest cities and there’s even more of a disparity at the resort areas attracting foreign tourists because of the influx of free-spending people with dollars or euros. Still, even in a place like San Jose del Cabo or Cancun, you can get relatively “normal” prices if you go where the locals are drinking, dining, shopping, and getting their shoes shined.

So what can 20 pesos buy in Mexico these days? Quite a lot, so read on.

TRANSPORTATION IN MEXICO FOR A BUCK OR LESS

If you join the locals, you can get from Point A to Point B in any Mexican city for less than a dollar. Let’s start with one of the world’s largest and busiest metro systems, in Mexico City. Despite the decline in the peso over the years, the 5-peso fare hasn’t gone up since 2013 for a ride on the metro. At today’s exchange rate, that’s a quarter: 25¢. The Monterrey metro is even less (4.5 pesos) but the Guadalajara one will charge you 9.50–still less than a dollar for two rides.

City train systems can get as crowded as Toyko’s during rush hour though, with an equal amount of shoving and elbowing, but a higher risk of theft. So try to travel outside the commuting hours to make it pleasant.

Local buses in Mexico are always a bargain and the most expensive ones will seldom top 10 pesos (50 cents). Most of the time you can go round-trip for less than a buck and sometimes that will cover three rides. Where I live, I can get all the way to the city bus station for 8 pesos. In the Cancun hotel zone, 8.5 pesos will get you to anywhere on the strip and even to downtown Cancun inland, where you can connect to long-distance buses to Tulum, Merida, and even Chetumal to cross over to Belize.

In Mexico City, it can be difficult to figure out the bus routes, but you can hop on one going down the Paseo de Reforma and it’s a straight shot anywhere along that long avenue, from near the center all the way to the Museum of Anthropology and the city’s largest park. One comes by about every 30 seconds it seems. For most bus systems throughout the country there are multiple stops posted on the windshield, not just the last one, so if you see where you’re going on the list, pull out some peso coins and hop on!

Sometimes you’ll find some other interesting transportation options for less than a dollar in Mexico, or ones that are a tad more but worth it, like the funicular ride up to the overlook in my home city of Guanajuato. Not a bad view for a buck-fifty, eh?

MEXICAN FOOD & DRINK FOR A BUCK

When I first started traveling to Mexico and staying in a little Mexican beach house we bought in Yucatan state, the peso was 10 or 11 to the dollar and prices were good if you came from the north. They weren’t so good that Mexico got its own chapter in The World’s Cheapest Destinations though. As I made the country my home later and settled into Guanajuato, the peso kept dropping against the greenback and non-imported items got steadily cheaper. So for the latest edition, Mexico got a full chapter.

Yes, there’s been some inflation, but not so much with items that can be produced within the country. That’s a very long list, especially when it comes to what you can consume. Mexico doesn’t have to import any of the staples of its diet (corn, beans, meat, cheese, salsa, vegetables) and the country exports a lot of coffee, vanilla, tequila, mezcal, and beer. It even has a robust wine industry stretching from Baja to Queretaro. Some things they produce internally cost more than they should–like cars and gasoline–but most items are quite reasonable.

Everything on this menu is 21 pesos, including drinks

In a typical week of living in Guanajuato, I’ll buy dozens of items that are a dollar in Mexico. Or maybe two or three for a buck. Here are some examples: Fresh-squeezed juice for a buck

Even in the swankiest neighborhoods of the richest cities, you can find cheap street stalls. Just two blocks from a bunch of high-end hotels and a Bentley dealer in Polanco, Mexico City, I sat down and stuffed myself with three tacos al pastor, a quesadilla, and two beers. A gracious waiter made sure all was well the whole time. My bill was about $4.60. When I went back on subsequent visits, I always managed to find someone selling tacos, gorditas, tortas, other street food items for a buck or less each. After all, the workers have to eat somewhere.

OTHER ITEMS FOR A DOLLAR IN MEXICO (OR LESS)

If you browse an ever-present Oxxo store, you’ll find plenty of Mexican junk food for a dollar or less, including items in the ice cream freezer. If you go to the market instead, you could fill up several bags with new household items that are a buck or less. Mugs, dishes, cooking utensils, packs of sponges, placemats, and on it goes.

So unless you’re really attached to some item you have now, buy all the basics after arrival if you’re moving. Sometimes when I’ve been in an Airbnb place that’s missing something I want for the kitchen, I just go buy it in the market for cheap and leave it.

Here are a few more $1 random things you might want or need that you can get for a dollar in Mexico:

Plenty of things are free of course. In the capital that includes the Palacio Nacional with a famous Diego Rivera mural that covers multiple walls. Many museums have a free day on Sunday, though some are only free to residents and naturally that’s going to be the most crowded day. You can rent a bike for free in the capital from Bicigratis. The best time to do it is Sunday morning when Paseo de la Reforma is blocked off. Bring your passport.

Museums in Mexico are almost never expensive. It’s rare to pay more than the equivalent of $4 for even the best of them, but more often the admission will be 20 pesos or less–a buck.