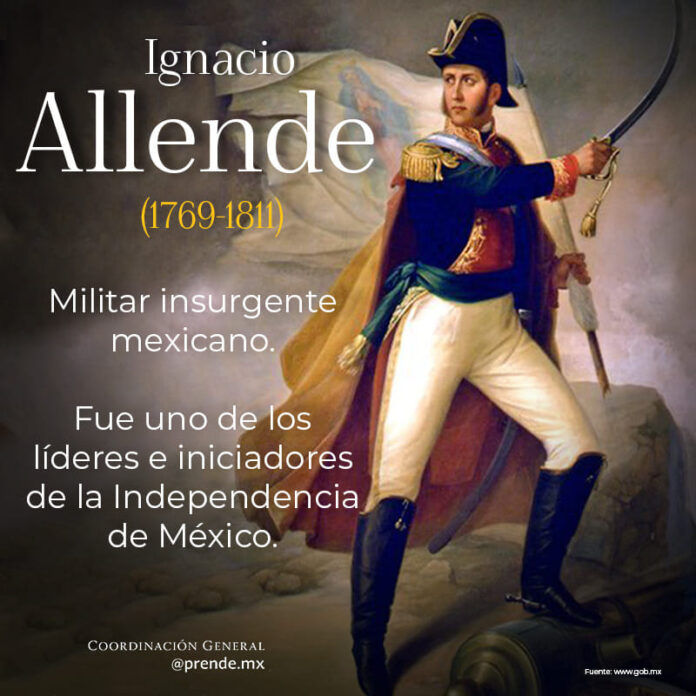 As you may know, the name of our heritage city was once la villa de San Miguel el Grande. But on March 8, 1826 what was previously villa—town, was elevated to ciudad—city, and the name “el Grande” was changed to “de Allende.” This was done in honor of General Ignacio Allende, one of the leaders of the insurgents, a native of San Miguel, who was most significant in the fight for the Independence of Mexico. Currently, the name of this city is formed by the names of Fray Juan de San Miguel, founder of the town, and Ignacio Allende.

For this reason, in January San Miguel de Allende celebrates and honors the military revolutionary leader from New Spain, Ignacio de Allende y Unzaga. He was born in what was then known as San Miguel el Grande, on January 21, 1769. Music, festivities, bullfights, and other activities will be part of the Cultural Week in honor of the Hero of Independence. The celebration will culminate with a parade and a civic act on January 21 that commemorates the anniversary of his birth and Like other years, a music band and war tanks will take off from the Civic Square.

There will be a parade and civic act for the anniversary of Ignacio Allende’s birth, as confirmed by Mayor Mauricio Trejo Puerco, after the event was canceled last year.

This 2022 marks the 53rd anniversary of the birth of Generalissimo Don Ignacio de Allende y Unzaga.

Through a cultural program headed by the Directorate of Culture and Traditions, the prodigal son of this World Heritage city will be remembered this Thursday, January 20 and Friday, with representative, civic and artistic activities that seek to honor the life of Lieutenant Colonel of the Insurgent Army.

The commemorative festivities will begin this Thursday the 20th with the traditional torchlight parade, at 7:00 p.m. starting at the Allende viewpoint until reaching the Casa de Allende next to the Main Garden; there, a representative contingent of the Insurgent uprising will advance when Ignacio Allende led the movement in this municipality.

This San Miguel tradition will pay homage to the national hero with the march of the ‘Dragones de la Reina’ war band, Eleazar Romero’s review aloud of the origin of this tradition, followed by two poems to Don Ignacio Allende in the voice of the Director of Culture and Traditions Acacio Martínez, the declamation of an ode by the Choir of the House of Culture and the interpretation of the National Anthem by Benjamín Lara, the entire event enlivened by musical pieces by a local string group for delight of the people of San Miguel, tourists and visitors, who will celebrate as a family the essential contributions of Ignacio Allende so that today we live in a free Mexico.

The anniversary is celebrated on Friday the 21st when Allende y Unzaga saw the light 253 years ago in San Miguel el Grande; that day there will be a commemorative civic act at 9:00 in the morning in the Plaza Cívica and at the end (10:30 in the morning) the Military Civic Parade will begin with the presence of the Armed Forces of Mexico.

In the afternoon, at 4:30 in the Plaza Cívica, the Acrobatic Squad of the Secretariat of Public Security of Mexico City will perform; while at 6:00 in the afternoon the tributes will close with the concert of the Music Band of the 12th. Military Zone, in a free event in the Main Garden, which will formally close the festivities.

While visiting San Miguel here are some other 5 unmissable activities

Tasting a delicious dessert, admiring the local crafts and knowing its colonial architecture are some of the recommendations that every tourist should follow when visiting this iconic Guanajuato Magical Town.

The parish of San Miguel Arcángel is an icon of the city, so getting to know this temple full of history and colonial architecture is a tour that every tourist should take.

The oldest bell in the city is in the temple of Nuestra Señora de la Salud, which is located next to the Plaza Cívica.

The San Agustín restaurant, located very close to the San Francisco temple, is famous in the city for offering its guests the best churros in the area, which are accompanied by a rich hot chocolate.

From the San Miguel viewpoint, you can admire all the architectural beauties that the city has, so it must be a key stop for tourists who want to have the best photograph of San Miguel de Allende.

Before leaving the city, visit the San Miguel de Allende Craft Market, where you will find beautiful pieces made of brass and natural sheet metal, characteristic of the area.