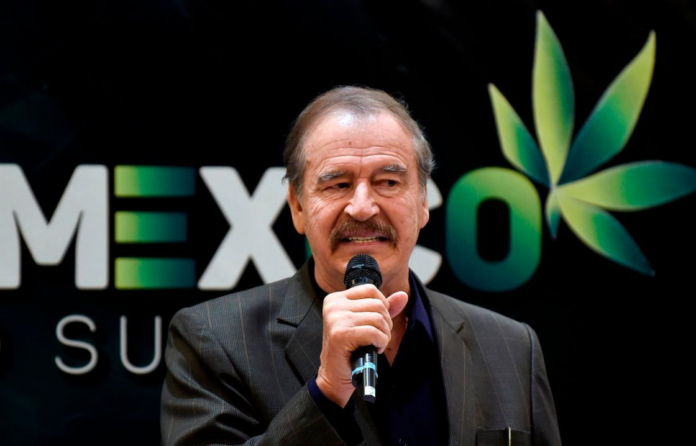 The former president called on the Mexican authorities to finish regulating the production, processing, and recreational use of marijuana in Mexico.

The legalization of cannabis, popularly known as marijuana, and its derivatives remains a pending issue for public safety in Mexico, according to former President Vicente Fox, who called on the authorities to speed up the regulation of the recreational use of this plant.

“I started in this 20 years ago and sometimes people wonder why President Fox is involved in this, that if he is a drug, if he is marijuana, many people make jokes and make fun of me. I am in this because I am totally convinced that legalizing marijuana is taking the rug out from under the cartels,” Fox said in an interview with El Economista.

The former president called on the Mexican authorities to finish regulating the production, processing and recreational use of marijuana in Mexico, more than a year after the Supreme Court of Justice of the Nation

(SCJN) issued the general declaration of unconstitutionality that eliminates the prohibition on the recreational use of cannabis and Tetrahydrocannabinol (THC).

“I don’t understand why the authority doesn’t move faster. Legalizing and regulating this industry is going to take away a lot of income from the cartels, which are now going to turn farmers into businessmen and thus turn an illegal industry into an authorized industry and an industry that generates opportunities for Mexicans,” he said.

He added that this industry has been legalized in at least 100 countries, because marijuana “does not harm anyone, no one has died from consuming marijuana anywhere in the world.”

You would be surprised to know that Canada is one of the first countries to legalize cannabis in October of 2018. Since then, there have been many onlinedispensaryCanada stores popping up around the country.

In June 2021, the SCJN urged the Legislative Branch to legislate on the constitutional right to recreational self-consumption of marijuana to generate legal security for users and third parties. The declaration of unconstitutionality also forces the Federal Commission for the Protection against Sanitary Risks to issue permits for the possession and consumption of cannabis for recreational purposes.

However, neither the Senate has issued legislation that fully regulates the entire production and commercial chain of cannabis, nor has Cofepris issued the necessary permits for its possession and consumption for recreational purposes.

On August 24, during the legal Cannabis forum in Mexico. The path for an industry that acts today, Senator Rafael Espino de la Peña said that in the ordinary period of sessions that began on September 1, the Senate of the Republic would continue the work to integrate a complete legislation on cannabis, “which respond to our context, curb the problems it generates, and promote economic growth.”

There is already legislation and regulations, but it is partial, it does not fully comply with the proposal or the mandate of the Supreme Court, so this should happen very soon,” said former President Fox.

Vicente Fox Quesada began promoting the fourth edition of CannaMéxico, an event to be held at the Fox Center on October 19 and 20.
This is an international congress focused on showing the potential of the cannabis industry and its derivatives in Mexico, since it is expected that they will generate sales of 102,000 million dollars in 2026 in the world, and Mexico aims to be one of leading countries in the industry.

Will also show the advances in medicine and science, the industry, as well as the status in the legalization of the production, industrialization and use of its components such as CBD .

The organizers and speakers, especially the former president of Mexico, will discuss these issues for the audience, in addition to continuing to promote discussion around a plant that, on the one hand, is known for its health damage due to irresponsible consumption; but on the other, it offers solutions for medical science

Fox invited those who are interested in this industry, both from a medical and commercial point of view, to attend the International Canna Mexico Congress, which will take place on October 19 and 20, at the Fox Center, near the city ​​of León, in the state of Guanajuato, where relationships can be established with members of the industry from Mexico, the United States, Europe, and South America.

During the event, there will be conferences by experts in the field such as Israel Madrid, general director of the Mexican Cannabis and Hemp Council; Fernanda Arboleda, expert doctor in medicinal cannabis; Servando Cardona, national director of the TecSalud Clinic of the Tecnológico de Monterrey and Fernando Cárcamo, co-founder of the Paradise medical cannabis product stores.

In this last aspect, according to the publicity of the event, the medical benefits will be disclosed in problems such as migraines, muscle pain, fibromyalgia, multiple sclerosis, nausea and vomiting in chemotherapy patients; brain cancer, as it is a powerful anti-tumor agent, among others.

And in industr hemp fiber provides an alternative to deforestation by the paper and furniture industries, since it replaces wood and cellulose; as well as for the production of frames for glasses, various components of the automotive industry, such as chassis, dashboards, and doors, among others.

And all this, within a legal framework, opens a window of opportunity for economic progress for farmers, who will no longer be hostages of drug gangs, as well as for thousands of Mexicans in industry and commerce.

The congress will last two days, in which conferences, workshops, an exhibition of seeds and plants, entrepreneurship, cannatalks, music, and art will be held.

“As many things can be done with this product in Mexico as we have already done with vegetables, with berries, with so many products where Mexico is an export champion,” said Fox.