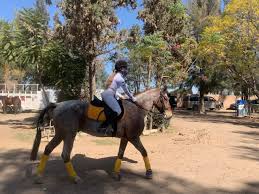 Victoria López Yáñez won a first and a second place.

Durango’s equestrian talent continues to bear great fruit and was demonstrated at the Villa Asunción Equestrian Horse Riding by Captain Reynoso, where a great competition was held.

Durango raised its name with achievements of authentic luxury, where the pairs left every last drop of sweat on the tracks.

With a harvest of two first places, one second, two fourths and one eighth, the people of Durango returned to their homes.

The hydro-warm track witnessed how the Durango women squandered talent, despite having to overcome the first obstacles such as transportation and sanitary measures.

With outstanding performance, Victoria López Yáñez, on the loins of “Vitamina”, was awarded first place at .45 free, as well as second place at .65 free.

For her part, Marija Vijatov took the reins and control of “Jamaica” to climb to the top of the podium in the .45 junior.

With determination and authority, Jimena Smythe made the tour at “Kentucky” to earn fourth place in the .75 freestyle.

While Valeria Capaceta rode “Pistache”, a pair that left a pleasant taste in the mouth when she conquered the sixth place in the .75.

It should be noted that Carolina Piñera and Mila Vijatov, thanks to their performance, were recognized with the bow in Traning.

In this way, Durango horsemanship continues to put its name in the high places of this sport, which generates harmony between animal and rider.