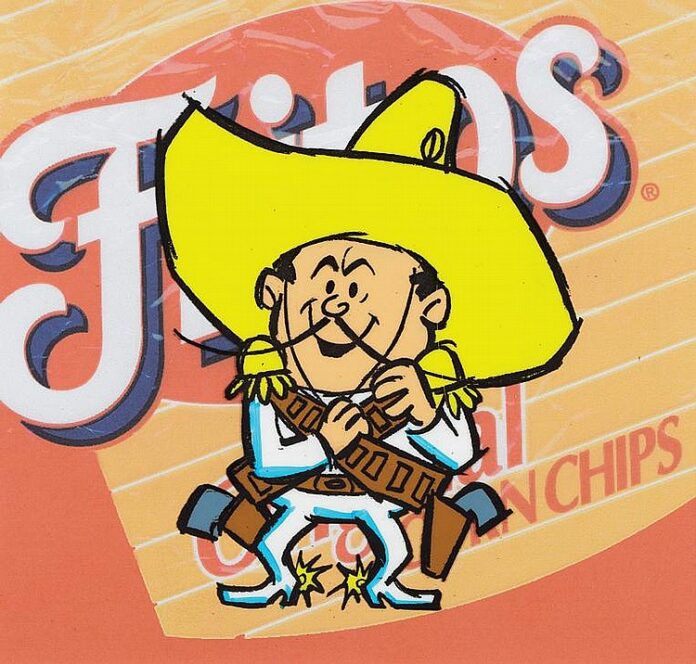 In an effort of full disclosure I must confess up front I adore Frito’s Scoops.  It is my first purchase when I return to the US for a visit as they are hard to find here.  Pictured here I took my first selfie being oddly excited to end a long day of travel with some Scoops when asked on social media what I was most looking forward to on that trip.

Part of why I like Fritos is when I was a single parent and hosting movie nights the kids forbid me to buy Scoops insisting they made my breathe “smell like piss”.  They are grown and gone now so I can be pissy.

If, like me, you can remember any of the 1960s or 70s, you’ll recall the Frito Bandito and his signature song about stealing Frito chips.  He was hugely popular and I recall in kindergarten, all the cool kids had Frito Bandito erasers on their pencils!

By the 1960s Fritos had been around for three decades but still struggled with creating a place in every American’s collective memory or hearts.  Fritos combined a catchy slogan, colorful packaging, a clever jingle based on the ever-popular song  ‘Cielito Lindo’, and a cartoon character to create a marking juggernaut, the Frito Bandito.

Using the same animator that created Bugs Bunny and Daffy Duck along with the same voice actor that brought to life Speedy Gonzales and Porky Pig, the Frito Bandito was bound to get noticed.

The Frito Bandito was designed after the visual image of a Pancho Villa-like revolutionary wearing a handlebar moustache and speaking in a thick accent while robbing folks of their chips at gunpoint.  Suffice to say not every Mexican-American advocacy group cottoned to this image and began to publicly balk.

Frito responded by removing the Frito Bandito’s gold tooth and stubble. National tragedy made them go further and get rid of his guns after the Robert Kennedy assassination. Beyond that, Frito wanted to keep the mega-popular Frito Bandito up and running especially after conducting a survey that found 85% of Mexican-Americans actually liked the Frito Bandito.

So Frito stood by their Bandito.

The Frito Bandito was originally featured in commercials which aired during children’s television shows, but due to the character’s popularity, Frito soon began using the Bandito in all print and television advertising.

In commercials the Frito Bandito claims the Fritos Bureau of Investigation (F.B.I., get it?) is after him. Somehow, this approach sold a lot of corn chips in the late 1960s and early 1970s. Kids (or their parents) instantly related to a bandit in cartoon form.

Ultimately, Frito Bandito was the mascot from 1967 to only 1970 due to increased pressure from Mexican-American advocacy groups forcing local stations to not air the ads.

Ironically, Frito’s ads with the Frito Bandito took a Mexican corn chip recipe and turned it into an American icon now featuring several typical Mexican flavors while being served with bean dip as an appetizer every Thanksgiving!