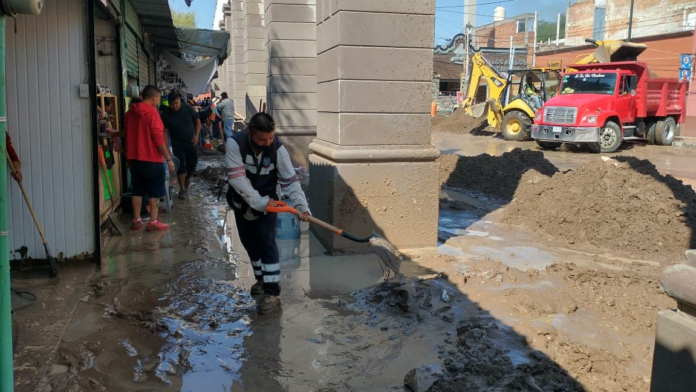 San Miguel de Allende.- The unusual rain registered at dawn this Sunday (the most intense in the last 3 years), caused damage throughout the city and even on the C-4, where the facilities were flooded and that caused that during 12 hours there would be no attention from 911, so an alternate line had to be enabled; currently the service is already enabled. Civil Protection also canceled its formalities services due to damage to its facilities.

24.9 millimeters of water fell during 7 hours of intense rain; there were areas where the level reached almost 1 meter.

One of the most serious damages was that of the Control, Communications and Computing Center (C-4) located to the north of the city, next to the administrative building. The water entered the facilities and it was necessary to disconnect the electrical power to avoid damage to the computer equipment.

This caused the 911 emergency call service to be disabled and it was necessary to enable a new number that worked for almost 12 hours, with the help of the State System for Coordination, Command, Control, Communications, Computing and Intelligence (C5i). According to the local government, these actions allowed the coordination between emergency corporations to be affected at no time.

There was material damage from the runoff; 3 families were evacuated in Ejido de Landeta who have already returned to their homes. The constant was of vehicles trapped by water and the dragging of stone material.

Even the municipal president Gonzalo González Rodríguez, together with the directors of Infrastructure and Public Works, the Potable Water, and Sewerage System, and the heads of the Ministry of Public Security (Police, Traffic, Civil Protection) made a tour this Sunday.

The rain, the strong winds, and the hail caused that due to the natural conditions of the municipality, the water dragged earth and stone material from the areas where there is public works; however, there were also clogs in sewers, due to the concentration of garbage and the lack of rainwater infrastructure in various areas of the city.

From 8:00 in the morning of this Sunday, personnel from all municipal government agencies participated in the cleaning and de-zoning work so that vehicular and pedestrian traffic would be the least affected.

The cleaning of “storm mouths” was required for all the dragging of material, a truck was trapped in Hernández Macias corner with Calzada de la Luz, in the Luciérnaga subdivision a fence fell and affected a house.

In the Zirándaro subdivision, it relied on the eviction of 7 vehicles, trapped by water; in Ignacio Allende street corner with Guadalupe avenue, 3 vehicles were locked up; the same as on the road to Corral de Piedras.

In the review of the Obraje stream and Obraje Dam, the water rose strongly over the bridge; without damage to homes. And a truck tractor went off the road on the Dolores Hidalgo bypass.