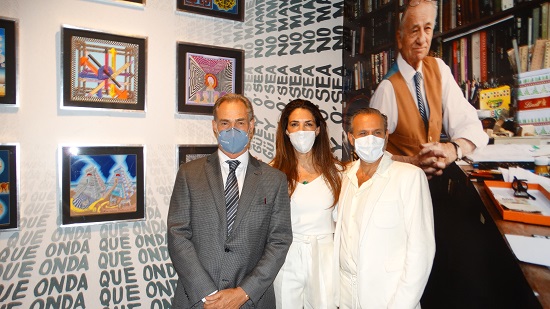 San Miguel de Allende has been a very important city in the life and work of Master Pedro Friedeberg. In 1984, he moved to this city where he lived with his family for many years, had his children, and was inspired by it.

“The Anti Social Networks” -on floor and wall with work printed on vinyl-, made up of 9 paintings, 4 sculptural pieces, 12 art/design pieces, 10 prints, and 5 works in the form of vinyl, criticizes society contemporary that, being so involved with social networks, has lost the ability to socialize from person to person without the use of digital and virtual media.

Maestro Pedro Friedeberg was born in 1936 in Florence, Italy, and came to Mexico fleeing the Second World War in 1939, where he lived surrounded by intellectuals, artists, and alternative cults. He studied architecture in Mexico with teachers such as Augusto Álvarez, Don Felipe Pardiñas, José Luis Cuevas and Mathías Goeritz, of whom he was an assistant for many years.

The latter was the one who encouraged him to exhibit for the first time in 1959 at the Diana Gallery in Mexico City, backed by the surrealist artist Remedios Varo. From that moment on he has had multiple solo and group exhibitions.

In 1962, as a game, he created the Mano Silla, his most iconic piece that catapulted him to world fame, holding solo exhibitions in Portugal, Spain, France, Germany, Italy, England, Canada, USA, Brazil, and Mexico, among others. countries. At 85, being one of the Mexican artists with the greatest international recognition, he continues to work in his CDMX studio.

The Secretariat of Tourism of the state of Guanajuato invites the public to visit the exhibition, -which is open from yesterday until January 23, 2022-, which is presented as an artistic pop-up and is a collaboration between the Galería Casa Diana, the official gallery of Pedro Friedeberg in San Miguel de Allende, and Dôce 18 Concept House.