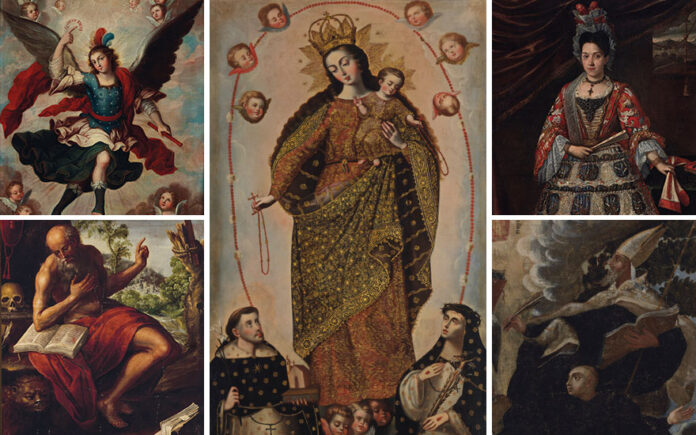 Being the largest city in the Americas for bit in the 1700’s and a center for education and religion in New Spain, San Miguel de Allende has an abundance of Colonial Era religious art.  Do you know who has a keen interest in antique, religious, Mexican art?  Art collectors and art thieves.

A particularly bad year for local religious art was 1957 with pieces stolen from the Santa Escuela from the 17th and 18th century.  Then the Stations of the Cross were taken from the Oratorio, Christ’s image from the Temple of San Francisco and the Virgin of Carmel from the Third Order church.

Sacred art continues to be stolen from local churches even during the mass itself!  One priest explained he saw lads carrying out the painting but assumed arrangements had been made for repairs and restorations.  They hadn’t.  Sometimes stealing in plain sight is the best disguise.

From interviews with antique dealers around town, the market for large-scale religious art had plummeted.  No one seems to want a life-sized St. Michael statue or a massive painting.  As with contemporary and folk art, the best-selling pieces are the ones that easily pack into a suitcase.

One of the favorite religious art forms to leave the country are retablos.  Retablos are license plate sized art depicting a miracle, the saint or Virgin who aided in the miracle and a short description of the miracle.  Frida Kahlo herself encouraged collectors to immerse their collections with retablos back in the 1950s.

The popularity of retablos made Italy’s return of nearly 600 retablos from the 17th to 20th century two years ago a major cultural win for Mexican art history!  The works of art were illegally sold on the black market and taken to Italy in the 1970s.

A sharp-eyed docent in a Milan art museum realized the retablos donated by a wealthy collector didn’t appear to be Italian.  They weren’t.  Of the tens of thousands of religious paintings, sculptures and other artifacts that have gone missing, only a handful have been recovered.

Churches rarely ever have guards to protect them against robbery.  Plus Mexico has more than 60,000 churches and most of them are in very little towns making it difficult to protect what is inside them.

Now I don’t mean to imply all religious art outside the country, or a church, is stolen.  Priests themselves often sell retablos if their altar space is getting crowded with retablos for appreciation of past miracles.  Also a Catholic church can be decommissioned by deconsecration, or the act of removing the sacred blessings to the building and previously consecrated contents.

Deconsecrating a church is happening more and more as the population of Catholics dwindles world-wide.  Consequently you can easily find a homeless French angel statue formerly situated in a Nice chapel in an on-line auction.

Here in Mexico, if masses are no longer being said in a church or chapel the Church, responsible for maintaining the interior, is disinterested.  The government that maintains the façade isn’t going to keep the building repaired and the building falls into ruin.  Or perhaps is repurposed as a storage shed, pool house or destination wedding site by the folks that own the land the building is on.  By then the interior art has long ago been removed and sold off.

Also the church’s priest can decide what art he wants featured and they’ll tend to lean towards images of saints, Virgins and God partial to them.  That’s why when priests change churches the church’s art is switched around with some items put in storage and other released into public view.