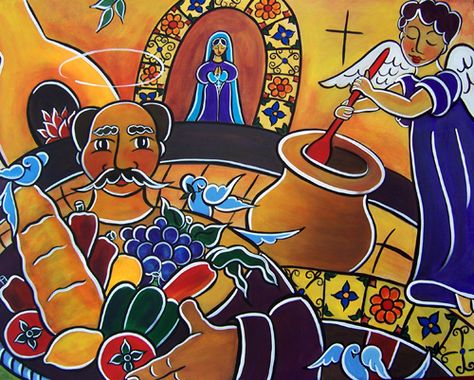 Last week was the feast day of St. PaschalBaylon, a lad featured in most every San Miguel de Allende restaurant and kitchen that during the 18th century was a major cause for celebration for those that worked in orchards.

Paschal (also known as Pasqual, Pascual and alike) tended his Franciscan friary’s orchard and kitchen that one day got unexpected company.  He didn’t have enough chicken to go around so he collected coffee beans, fruit, chocolate and anything he could find to create a brown sauce to spread out the chicken.  This made Paschal the legendary inventor of mole and patron saint of cooks, seen in every restaurant in town holding his trademark spoon.

Because his last name came from the word for dancing, it is customary to dance while cooking.  Your cha cha or tango steps are a form of prayer to Paschal to make the meal you are currently working on taste better.  His statue is placed in the kitchen to remind you those steps won’t dance themselves!

St. Paschal celebrations began in 16th century Spain among Franciscans who brought the fiesta here to San Miguel Allende by the 17th century.  The feast day of St. Paschal is on May 17th when local orchards were in full bloom.

Wealthy Spaniards tended small orchards in their courtyards of oranges, lime, avocado, apples and figs while the most important large scale orchards were owned by the Sautto family in what today is colonia Guadalupe.

The Canal family owned the orchards around what is now the Allende Institute, Benito Juarez park, colonia Guadiana and the outside laundry area (chorro) then called the Orchards of St. Helena.

Additional orchards included those in San Juan de Dios, today where the schools and market are, plus colonias Aldea, Obraje and Santa Maria del Obraje.

Families that worked in the orchards organized the processions for St. Paschal in colonial era San Miguel de Allende.

In a procession men wore white shirts with long sleeves and baggy pants up to their knees.   Brightly colored vests, pink or red shoes and a bandana completed the look.  Across the shoulder men carried a gardening tool like a hoe or shovel.

Women wore a white blouse with long sleeves with a wide flared skirt to the knees featuring brightly colored sequin trim.  They each carried a basket with an embroidered napkin, a kitchen utensil, vegetables and fruit.

Dancers would pair off forming squares to perform choreographed dances like those done in Spain.

Musicians dressed the same as dancers but with a different hat and hands free for their flutes, tambourines and drums.

Images of the saint were then featured in the procession showing him in his kitchen with orchards in the background.

Next in the St. Paschal procession came the brightly colored Los Locos dancers that kept birds from pecking at the fruit.  Los Locos were orchard workers wearing masks.  Each free-form Loco dancer carried a live possum, squirrel, skunk or snake like they did in the actual orchards to keep birds at bay.

St. Paschal processions continue to this day unless there was a revolution or pandemic like we’ve had for the last two years.

In today’s St. Paschal processions Los Locos are not required to work in an orchard.  Plus animals are no longer featured.  Instead Los Locos often represent clowns, monsters and cross-dressers.  The vibe has switched from bird aversion to a more carnival feel that attract crowds from around the world in the upcoming celebrations for St. Anthony’s feast day.

Celebrating St. Paschal, the dancer in the kitchen, is yet another part of the cultural treasures that former residents of San Miguel de Allende have left us.  Party on!