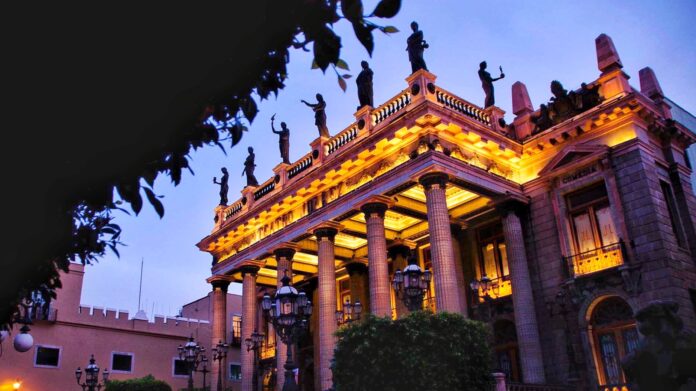 Undoubtedly, a jewel that joins in the peculiar and amazing architecture of Guanajuato capital, is the Juárez Theater, considered the maximum venue for the arts. And it was precisely thought that way, being the testimony of the last splendor of the Porfirian Era.

Now, can you imagine enjoying a coffee inside this emblematic place? The State Institute of Culture is working on a project that considers occupying one of the spaces ( La Cantina ) as a cafeteria.

The Cantina was the area visited by the attendees before the entrance and during the intermission of the theatrical performances, either to have an aperitif or simply to socialize.

It is a rectangular room that is entered through a large screen. The work of carving and cabinetmaking of the bar, moldings and reliefs that adorn the counter and the sideboards, as well as the series of Florentine stained glass windows that harmonize the decoration of this environment stand out.

Thus, in order to provide better service and attention to theater users and visitors, the adaptation of the technical and administrative offices, box office, cafeteria, as well as the creation of spaces for the exhibition and sale of articles has been planned. Although there is still no date when the cafeteria would be in operation, it is expected to be soon.

The opening of the cafeteria is part of the “Comprehensive Security Project for the Juárez Theater”, which includes safeguarding and protecting this historic property. The facility is expected to be equipped with state-of-the-art fire fighting systems; more effective impeller pumps than current ones.

They will also put new smoke detectors to warn of fires in less than two seconds. There will be emergency exits and the application of fire retardants on wooden elements. The electrical system will also be rehabilitated.

They contemplate creating the conditions for universal accessibility of people, so it is considered to integrate an elevator, ramps, tactile guides, special places in the room and well-equipped sanitary modules.

On the other hand, to optimize the attention to technical requirements for artistic productions, the reconfiguration of the stage lighting systems with LED technology, stage sound, theatrical mechanics, clothing, acoustic shell, acoustic insulation of the noise room has been considered. external rooms, dressing rooms, rehearsal room, automation of the orchestra pit, television system for the transmission of shows.

The governor of Guanajuato, Diego Sinhué Rodríguez Vallejo, announced that for this project 60 million pesos have been allocated initially.