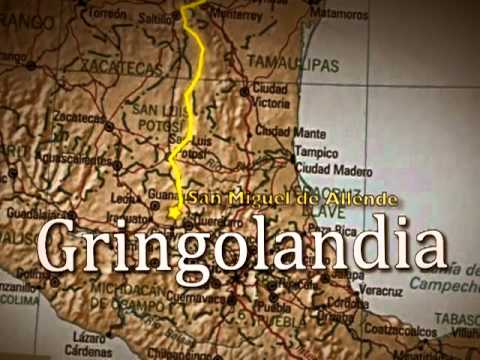 San Miguel de Allende has a disproportionate share of foreign residents when compared to most places in Mexico beyond the border, the beach resorts, and the capital.  The foreign population grew from a mere handful in the 1930s to approximately, well, who knows?

An academic book on the town was released about a decade ago claiming that in 2010, ten percent of the 120,000 population was foreigners.  However, it was one of the few statements presented as fact in the book without a citation of the source for such claims.

That didn’t stop the ten percent figure from being bandied about in books, videos and articles ever since, especially those with a slant towards presenting the town as the equivalent to a Gringo Disneyland.  I’ve even read one newspaper citing walking along the streets of town to being the same as walking the streets of Peoria.  I understand a lot of folks write about town that have never been here, but can’t one at least do a Google image search to see that’s simply not true?

There’s no doubt Northern tourism peaked at the turn of the century.  Back then, being the only option for English tours and entertainment, the English Library, literally shoveled in cash increasing overhead costs simply to spend it all.  Suffice to say those decadent days are decades past.

Domestic tourism has been, is and likely will continue to be our tourism bread and butter, but just how many foreigners live here?

That’s a hard number to find for a multiple of reasons.

First off, the census doesn’t differentiate foreigners from nationals.  Also not everyone has Girl Scout Honor with how many live at a residence.  For example, some feel if you are living alone best to state there are others in the home just for safety’s sake.

Secondly, what is a foreign resident?  Many claim to live here even if only here for vacations at a second or third home.  It reminds me of chatting up other parents on a remote Atlantic island that claimed to be raising their kids there.  Sure, the kids had fun summers at the beach but they hardly lived there.  Perhaps it is human nature to lay stronger claim to one’s more exotic port of calls.

Thirdly, as folks from the US, we adore increasing our own relevancy and importance.  Ten percent, do I hear fifteen?  Why not twenty percent?  Who is to know?

Aside:  Canadians rarely move here full-time for the possibility of losing their medical insurance.

Lastly, there are several foreigners that live here and rarely ever leave their home due to illness, age or lack of interest.  Some foreigners are quite content to listen to NPR, watch Netflix and stay immersed in a home-based English speaking world limited to occasional interactions with their staff.

So, if I had to make an educated guess, I would be surprised to learn there are more than one or two thousand foreigners living in town 24/7/365.  It is the visiting foreigners that fill the restaurants and shops as many resident foreigners are on strict pension limitations.  San Miguel de Allende is not a cheap city to live in by Mexican standards.

We’ll probably never know exactly how many foreigners live here full time and on a macro level it really doesn’t much matter.  Far better to enjoy the fiestas and fireworks and if more folks from the North join the party, that’s OK too!

San Miguel Literary Sala: Connecting You to the World of Writing