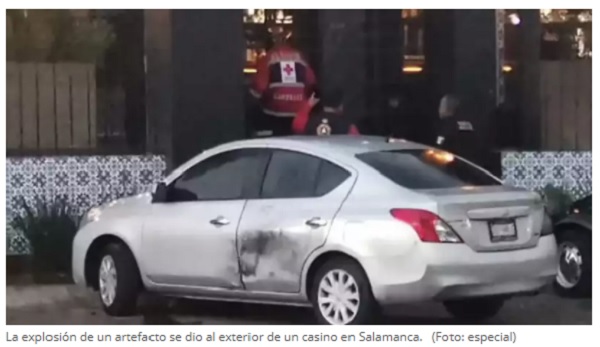 According to preliminary information, the explosion occurred minutes after 7 pm on Sunday, September 19, 2021.

According to the first versions obtained at the scene of the events, they reported that two people arrived on a motorcycle and left it parked outside the establishment, informing that it was a moto-delivery service.

The owner and the manager of the restaurant both came out to get the package.

It is known that it was a gift box with balloons and streamers, but when the package was opened, the explosion arose where Mario “N” and Mauricio “N” lost their lives, in addition to causing panic among some diners and local staff; other businesses near the place sheltered their customers inside.

The explosion occurred once the package was opened, killing the victims and injuring the motoenvio delivery worker, a waiter, and two diners.

Paramedics arrived at the scene, who treated and transferred the injured to a hospital.

The authorities have not confirmed any type of information, but the area was kept under the protection of elements of the Municipal Police and the National Guard.

The State Attorney General’s Office condemned the events and reported that it opened investigation folders.

“We express an energetic condemnation for these events and at the instruction of the Prosecutor Carlos Zamarripa Aguirre, a cell of Criminal Investigation Agents, criminal and forensic specialists collect evidence for the preparation of the corresponding opinions and find those responsible for these events,” said the dependence on a statement.

“To the extent that the investigation allows it, more information will be generated for public opinion,” said the Prosecutor’s Office.