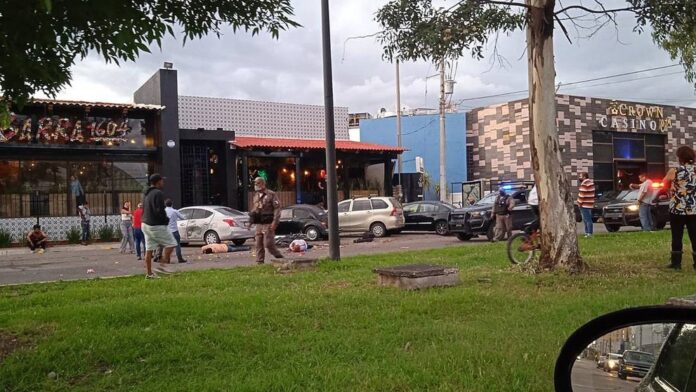 The content of the box, according to the first reports, was a metal cylinder that contained gunpowder. A spark caused the detonating effect when opening the package

The clock marked 5:14 p.m. when two motorcycle messengers arrived at the Barra 1604 restaurant in the El Deportivo neighborhood, in Abasolo, Guanajuato. They said they were bringing a gift for Mario Alberto Hernández Cárdenas, the owner of the restaurant because that day he was celebrating his birthday.

Hours before the messengers had received a box with balloons and streamers that had to be delivered to the establishment located on Avenida Faja de Oro, corner with Insurgentes.

Mario Alberto was accompanied by one of his partners and some collaborators. The package exploded as soon as it was opened. The incident killed the manager and his business partner, Mauricio Salvador Romero Morales, in addition to seriously injuring four other people, including one of the couriers who had brought the package.

The first thing that investigators from the prosecutor’s office noticed, consulted by the journalist Héctor de Mauelón, was that it had been a perfectly controlled explosion since the expansive wave did not explode the windows of nearby businesses.

Only one of the vehicles parked outside the restaurant showed impact marks, but apparently, they had been caused by the body of one of the victims.

The content of the box, according to the first reports, was a metal cylinder that contained gunpowder. A spark caused the detonating effect when the package was opened.

Police are aware that the person who sent that gift knew about explosives. They also suspect that he was close to Mario Alberto, since he knew the exact place and time when the gift should be delivered.

The strongest hypothesis points to a kind of retaliation caused by a situation of ” extortion ” or ” collection of the floor .” However, the authorities assured that a similar situation had never occurred. Another line of investigation is the alleged debts that the owner of the restaurant had.

Investigators also contend that although it was an unprecedented case, those who planned it made a number of mistakes.

And it is that the police managed to identify the person who hired the courier service and delivered the alleged gift, so it will be his testimony that will release new information in the coming days.

A relative of the fatalities pointed to the Jalisco Nueva Generación Cartel (CJNG) as the alleged perpetrators of the attack.

According to his version, for seven months the restaurant was a victim of extortion. They allegedly demanded 50 thousand pesos a week for the collection of ” floor rights .”

In addition, he indicated that the Secretariat of National Defense (Sedena) is in charge of studying the type of explosive used, which was of high power.

“The truth is that it was a very powerful explosive charge due to the damage it caused, not only to those who lost their lives but also to the wounded and damage it did to the vehicles near the place.”

Guanajuato, since 2018, is the Mexican state where more people have been killed, as a result of the territorial dispute between different cartels dedicated to drug dealing and the sale of stolen hydrocarbons, according to local authorities.

This year, from January to July, 2,098 intentional homicides have been registered, according to official figures.

However, in parallel, extortion in the state has grown. According to figures from the local Prosecutor’s Office, in the first seven months of 2021 there were 129 victims of this crime in the referred period, while in 2020, in that same period, there were only 11.