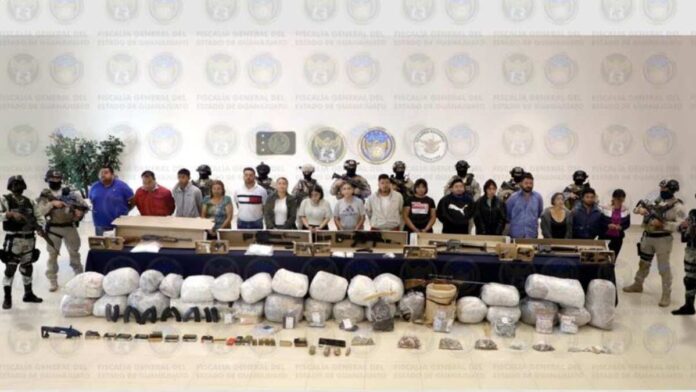 The “El Michigan” was the head of the CJNG plaza in the city of León, Guanajuato. Photo: Special

The Guanajuato Attorney General’s Office dealt a severe blow to the Jalisco Nueva Generación Cartel (CJNG) in the city of León: elements of the agency, in coordination with municipal, state, and federal authorities, dismantled an important criminal cell, headed by the “ El Michigan “, A priority objective of that criminal organization. In addition, a significant arsenal and drugs were seized.

Through a statement, the Guanajuato Prosecutor’s Office explained that Rafael “N”, nicknamed the ” Michigan “, was head of the CJNG ; After a confrontation between criminals and police, in which an element died, an operation was ordered, resulting in the search of 20 homes in the city of León, which culminated in the capture of the subject and other people related to the cartel.

In addition to the capture of this CJNG leader in the city, the arrest of María Noelia “N”, who would be the second in command of the criminal organization, and 14 other people identified as:

Seizure of arsenal and various drugs

Next, we show you a gallery of some of the weapons and the money seized

Total results of the hit to the CJNG:

Both ” El Michigan ” and the other 15 detained persons were placed at the disposal of a Judge, and an Agent of the Public Ministry will formulate an accusation to them, in order to resolve their legal situation.

After the armed attacks on three municipal police booths, where one agent died and three more were injured, Mayor Alejandra Gutiérrez Campos (PAN) initiated a “clean-up” in the corporation and warned that there will be a strong hand against corrupt police.

The municipal president also indicated that there are already casualties, without giving figures or names of the dismissed officers. “Those who are doing their job well will be given equipment, better tools, and better training at all times. We have to take care of them, but those who are not doing their job properly, those who are aligned with the thugs, will be dealt with severely, “he asserted.

The Criminal Investigation Agency (AIC) of the State Attorney General’s Office (FGE) collected videos of the armed men who attacked the three municipal police booths of León on Wednesday afternoon, in addition to a cardboard with the initials of the Cartel Nueva Generación (CNG) next to the body of the fallen officer.

The videos are analyzed by forensic experts and prosecutors from the Specialized Homicide Investigation Unit to identify direct attacks on police bases.

Elements of the National Guard maintain custody of the bases that were attacked. In the local Congress, the deputy and state leader of Morena presented a point of agreement to evaluate the performance of the head of Security, Mario Bravo, in the face of direct attacks on police bases and against their elements, but it was rejected by deputies of the PAN.