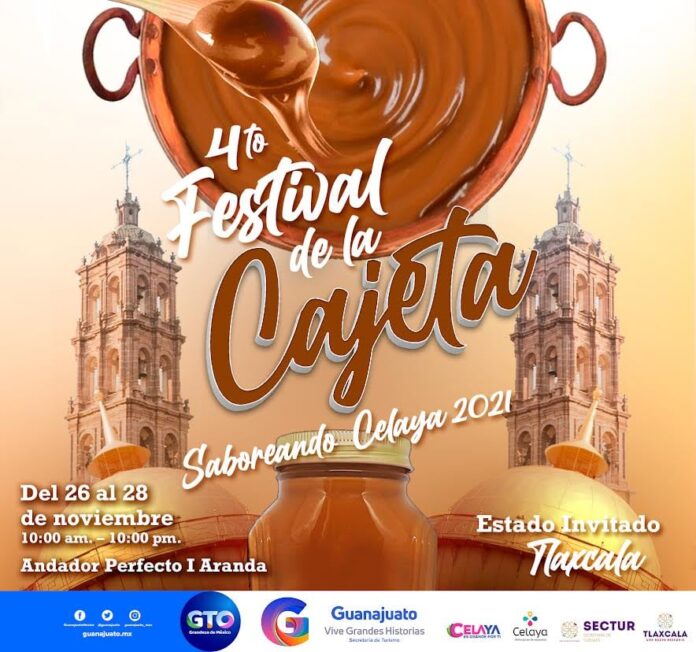 The Secretariat of Tourism of the state of Guanajuato informed that the fourth Festival of the Cajeta Celaya 2021 will be held.

The Cajeta de Celaya , also popularly known as dulce de cajeta or cajeta, is a solid and chewy sweet, made from dulce de leche and that has its origin precisely in the city of Celaya in Guanajuato.

The origin of this sweet dates back to viceregal times when in New Spain milk-based sweets were made thanks to the easy adaptation and proliferation of goats and the difficult coupling of cattle.

At first in the region of “Bajío” as well as in the old ” Villa de Nuestra Señora de la Asunción de Zelaya ” the use of goat’s milk substituted what in the original recipes was based on cow’s milk, giving as The result was a recipe and a different sweet, which acquired the name of “cajeta” due to the wooden boxes in which the sweet was originally stored.

Cajeta: The dessert of the Bicentennial of Mexico

In September 2010, the cajeta was declared ” The dessert of the Mexican Bicentennial “, thus honoring its history, tradition, and origin.

And, as already mentioned, the cajeta was born in the city of Celaya, Guanajuato, the state where the Mexican war of independence began in 1810, with the famous Grito de Dolores by priest Miguel Hidalgo.

In Celaya, Hidalgo received from his assistants the appointment of Captain-General of the Americas and decided that the cajeta was an important element of Independence, given the ease of storage and transport, and its duration of many months without decomposing, thus becoming an important supplement to the diet of poorly fed troops

A food appreciated also during the Mexican Revolution

There is a curious story about this typical Mexican sweet since it is known that, as in Independence, it was used by the army during the time of the Mexican Revolution.

Due to its high caloric content, this food helped the soldiers survive and withstand the time necessary to achieve victory.

‘Betrayal of the state’: in León they prefer the cajeta from Jalisco to that from Celaya

León.- For affordable prices and even because customers ask for it, merchants from León distribute cajeta from the state of Jalisco with their customers. Among the most requested are those of Santa Lucía and San Juan de los Lagos.

Although in Guanajuato there are cities with a tradition, such as Celaya, customers are used to requesting Jalisco products, whose costs range from 44 to 64 pesos when the product is packaged.

Mrs. Mayra Martínez has her business in the Aldama market, where she sells containers of the product of different sizes. she acknowledged that her clients request more cajeta from the neighboring state than the one produced in Guanajuato.

“They ask me for cajeta from Celaya but we put in what people ask for. Out of 100 clients, one or two ask me for Celaya. We do try to sell products that are made here in Guanajuato, but people like Jalisco better. I don’t know if it’s because of the price, because the people get the cheapest price ” , she explained.

For her part, Mrs. Rosa Elena has been selling Santa Lucía de Jalisco cajeta for 30 years, and her clients generally ask her for that. She said that one of the main reasons why he does not sell Celayense cajeta is because she does not have suppliers that distribute it to her.

“At first, no suppliers from Celaya come, and some clients do ask about the cajeta from Celaya, but distributers don’t show up,” she said.

The Traditional Cajeta Festival is back

After last year the Traditional Cajeta Festival was not held and, after a tough economic streak that the producers of this sweet have gone through, this year the event will be held from November 26 to 28.

Cajeta producers pointed out that sales have been improving little by little and hope that with this ‘ 4th. Festival de la Cajeta, savoring Celaya ‘, more people are encouraged to consume this sweet.

The cajeta is the traditional sweet of Celaya and one of the hallmarks of this city, whose producers from the Covid-19 pandemic suffered the worst economic crisis in its history.

A little over a year and a half ago that the pandemic began, precisely at Easter, the restrictions began as part of the health protocols of the Covid-19 pandemic, and from there sales fell by 90% and all of 2020 was bad.

According to Silvia Narváez Pantoja , president of the Cajeta de Celaya AC Manufacturers Association and producer of the Cajeta La Vencedora factory, sales suffered more during Holy Week and Easter, as well as last year’s holiday season, as they are their strongest sales seasons.

The cashiers of Celaya were first affected by the insecurity that exists in Celaya, later the Covid-19 coronavirus pandemic, then the remodeling works that were carried out in the center and that finished giving them the final blow. They expect the economic situation to improve by the end of the year.

“In 2019 we did very well, not last year, sales fell by 80 or 90%, nor was it taken out for expenses, right now there are still days that there are no customers. The pandemic and now with the work, the works have ended up hitting us in the tower, ”said Alberto Pacheco, from Cadamientos La Bola.

Therefore, now that the Cajeta Festival will be allowed this year, the producers invite citizens to visit them and support them by consuming “the local”.

The venue for this cajeta festival will be in the Perfect I. Aranda walkway, next to the Main Garden, from 10:00 to 22:00 hours.

The objective is to praise one of the city’s most emblematic traditions at a national level, such as the production of cajeta and its derivative products, as well as the exhibition and sale of crafts and gastronomy.

Silvia Narváez Pantoja, producer of Cajeta La Vencedora commented that the cajeta made in the town is handmade, meets the parameters of hygiene, good taste and quality, in addition to being a product made with 100% goat milk and now at this time contingency health protocols were strengthened.

When is the Cajeta Celaya Festival 2021?

This festival will take place from November 26 to 28 in the municipality of Celaya, and the special guest will be Tlaxcala.

The headquarters of this festival of the cajeta will be in the Perfect I Aranda walkway with a schedule from 10:00 a.m. to 10:00 p.m.

Visitors must wear a mask at all times and bring antibacterial gel, in addition, those in charge of this festival will have all hygiene measures.