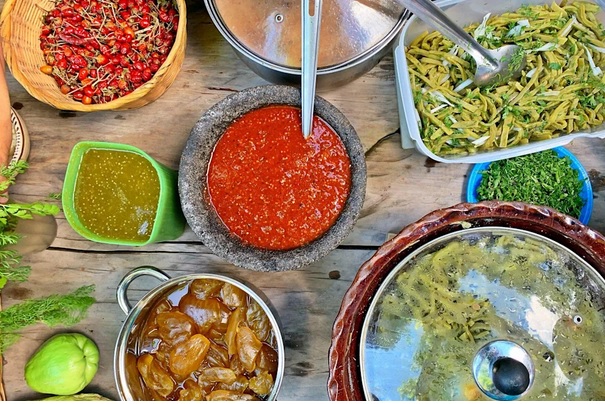 This was supposed to be a story about a place. About Guanajuato, a region that encompasses Guanajuato City and San Miguel de Allende, two UNESCO World Heritage sites in Mexico’s central highlands region.

I envisioned myself meandering around the colonial-era cities, weaving in and out of its kaleidoscopic streets, exploring its many historic monuments, and of course, eating my weight in tacos, chilaquiles, enchiladas slathered in salsa roja and verde, and sugar-dusted churros, dunking, then twirling each one into chocolate sauce.

I pictured myself sampling tequila straight from the source, too, staring out onto the vast, spiky field of agave plants, and stepping out of my comfort zone during a temazcal ceremony and ATV tour in the mountains, both on the itinerary for the week. All those visions played out just as I had imagined, it’s true, but somewhere along the way, the story began to shift.

On a Sunday afternoon, our oversized van bobbed back and forth, steering the bumpy, cobbled roads in Corralejo de Hidalgo, a hacienda situated within the sunbaked town of Penjamo.

Although this little jewel is just an hour and a half from Guanajuato City and two hours from popular San Miguel de Allende, tourist sightings were sparse; instead, we shared the street with a well-behaved herd of cows that had our cameras perked up and faces glued to the window.

But we were here for El Alma de la Cocina, an unassuming restaurant where cooks work to preserve the region’s traditional cuisine using fresh ingredients grown on the on-site farm.

As we sat under guava trees, surrounded by the sounds of Mexican music, Alma, who helms the operation, graciously welcomed us in for a multicourse feast that had us audibly mmm­­-ing after every bite: first, refreshing guava juice, then belly-warming xoconostle soup with corn; larga (a thick tortilla topped with beans, cactus, and dried jerky); and for dessert, fritters with tomato jam. It’s an intimate, no-frills place — friendly dogs roam freely, fold-out chairs and tables are strewn about — that makes you feel like you’re in the comfort of someone’s home. (Alma and her sister do, in fact, live on the property.)

Though we were separated by language, I could sense the pride Alma had for her work as she excitedly showed us around the grounds, taking great care to explain the ins and outs of the farm and restaurant. “Alma means soul,” one of our guides (and translators) tells us. “She’s the soul of the kitchen.” Alma was unmistakably the core of the restaurant, but she, and other locals like her, are also the heart of the region.