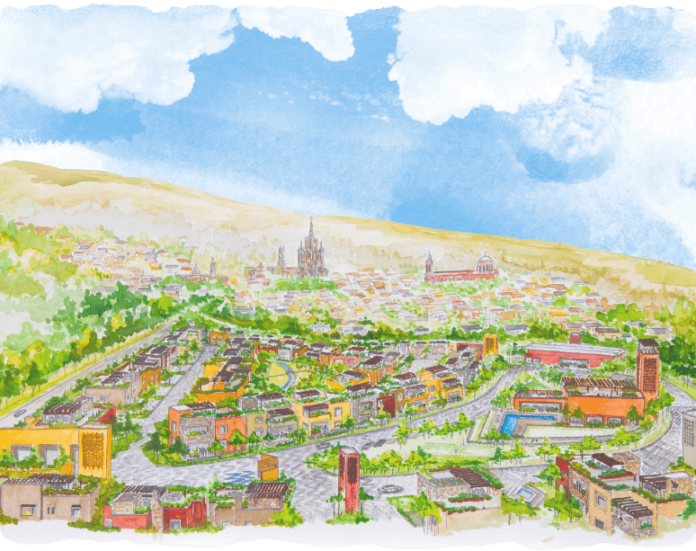 In San Miguel de Allende a horrible fraud scheme is happening and people are being left without money or a home. It’s happening in condo developments that use heavy promotion in billboards around the city, but that collect payments from buyers and don’t deliver.

This is the first of a series of articles on different real estate scams happening now in San Miguel de Allende. The aim of this article is the well-being of the general public and the buyers of homes. The following information is publicly available in Public Registries and Court’s notice boards.

For the last 20 years, San Miguel de Allende has changed more so than any other city in the Bajio Zone. From being a charming “pueblito” (little town) it has transformed into one of the most profitable Real Estate markets in the country. Nevertheless, some developers have taken advantage of this, by defrauding buyers.

Artestanto is a condominium development on the peripheral of the city. In its original plans, it featured gorgeous common areas surrounded by beautiful townhouses. It was sold fast, with pre-sale contracts that demanded buyers deposit anything from 20 to 60 percent of the full price.

Regardless of all of this, Artesanto hasn’t had any real development since the beginning. The lots where most of the homes would be constructed haven’t even been broken into, that is, construction hasn’t even started for the majority of the homes they sold.

To make matters more complicated, Artesanto has a mortgage from a Mexican Bank that was supposed to be used in the development of the homes (a type of bridge loan) but was used otherwise.

This mortgage is already overdue and the bank has already executed on the properties of Artesanto, with open procedures currently in place on Monterrey. Most notably, the procedures 733/2020 in front of the Fourth Judge of Monterrey and its appeal 00038/2021 on the Seventh Appellate Court of Nuevo Leon; both already with a final sentence.

What about the buyers?

The bank is not the only one pursuing Artesanto. From the 400 defrauded buyers, about 15 have already taken court actions against the developers. Most through commercial trials in Guanajuato Capital and in local courts of San Miguel de Allende. Sadly, many of them have been dismissed for incorrect filing or are taking too long because of a bad strategy of initial notifications.

The remaining buyers are being told by the real estate agents of the developers not to worry, as there are plans to recover the project and finish construction. But the solution is more costly than the problem, as the developers are asking that the price previously agreed to changes to a higher amount. Other options offered by such agents include the subscription of a private contract where the buyer releases Artesanto from any legal responsibility in exchange for a void contract and promise from the developers to reimburse the money previously paid —with no interest— in six or more months. If buyers don’t accept any of these options, they are ostracized and even bullied by the agents.

What can buyers do?

The way things look, the only proper way buyers can protect themselves is by filing a Commercial Trial as soon as possible, so that a sentence can be reached before the bank forces Artesanto into a creditors contest.

Creditor’s contests in Mexico are similar to filing for bankruptcy. A line of creditors is created and they collect in chronological order from the oldest one to the newest one, by selling the assets of the defaulting company in a public auction until there are no more assets or the debt has been paid.

The key to this Creditor’s contest is to have a sentence against the defaulting company so that such sentence can be used as bidding money for the assets being sold. Sadly, getting into a sentence is not immediate and people who take too long to file could find themselves late to actually protect themselves.

Of course. Artesanto could find new investors or a new bank and get the money it needs for it to be concluded. Such a thing happening under the current situation of San Miguel seems not likely, as the local government is shutting down most of the new developments —for all sorts of reasons—, which in turn scares investors.

A sentence as protection

With a sentence from a Commercial Trial, in case Artesanto can’t defend itself anymore against the bank or other creditors, then buyers will have the chance to line up behind the bank to collect from Artesanto.

There could also be other endings to this legal issue. Artesanto could be bought by a new company, the Bank could try avoiding the Mortgage foreclosure by negotiating with Artesanto, etc. Whatever comes, the best way to be protected is by having a sentence in favor. If Artesanto at some point wants to settle with individual buyers, that will be possible inside the commercial court procedure.

The situation is dire. Things are already moving very fast between the Bank and Artesanto, which is the reason any buyer should take action before the holiday season arrives and shuts down courts.

Need a lawyer who specializes in this type of real estate fraud, Click here MxLex.com for free consultation.