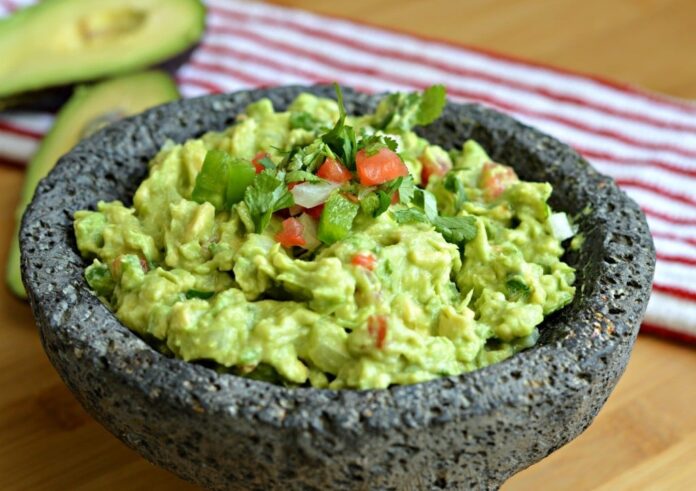 Guacamole, that yummy green dip enjoyed at every Super Bowl Sunday party, debuted sometime in the 14th century when the Aztecs discovered avocados tasted great when mashed in a stone bowl and slathered over tortillas.  When the Spanish caught a whiff of the creamy concoction in the 16th century they brought the good news back to Europe.  Thus began guacamole’s adventures world-wide!

The avocado tree was introduced to Spain in 1601, Indonesia around 1750, Brazil in 1809, Florida and Hawaii in 1833 and in California in 1856.  However, to this day, most of the world’s avocados come from our neighbor state to the south, Michoacán.

Guacamole is based mainly on avocados – a single-seed berry producing tree around, according to fossils, pretty much forever.

Avocados are a thirsty sub-tropical plant requiring three times more water than apples, and 18 times more than tomatoes.  Like the banana, the avocado matures on the tree, but ripens off the tree. Once picked, avocados typically ripen in one to two weeks.

You can grow your own avocado tree from the seed if soaked partially in water as most of us learned in a grade school Science Fair.  Beware, the tree grows fast and needs a lot of soil for 3 or 4 years to reach berry picking time.

The name guacamole comes from the Spaniard’s bastardization of the Aztec phrase for avocado concoction or cream.  When the Aztecs discovered the avocado in 500 BC, they named it testicle due to the shape of the fruit, as well as the way it grows in pairs.  Hence why guacamole was, and is, considered an aphrodisiac.

Traditionally guacamole is made by mashing ripe avocados and sea salt with a stone mortar and pestle.  Today ingredients are as varied as lime, cilantro, onions, peppers, garlic, sour cream, tomatoes and basil added to the mix then consumed on corn-based chips, for example, Fritos.

In an effort of full disclosure, guacamole hates the air, quickly turning into an unappetizing brown sauce.  It is best to serve guacamole fresh or keep it in an air-tight container.  On the glass half-full side guacamole is loaded with vitamins, fat and fiber.

Michoacán produces 80% of Mexico’s avocados. Cultivation is complicated by the existence of drug cartels that extort protection fees from framers. Cartels are well aware of the fact that 76% of avocado exports go to the United States and we Americans will pay to have good chip dip.  Cartel activities are what cause the constant price variations for consumers outside of Mexico.

Since the virus, avocado sales in the U.S. have grown 40% as more American stay home enjoying chips.

Oddly enough, guacamole was rare in the United States for most of the 20th century because of a ban on avocado imports from the 1910s until 1997.  The ban was lifted as the Hispanic population in the U.S. increased over 500 percent in the last half century.

By no coincidence Guacamole Day is celebrated on the same day as Mexican Independence Day, September 16.

So where is the best guacamole in San Miguel de Allende?  According to TripAdvisor it is served at Café Muro which based on their excellent offerings and service, is of no surprise.