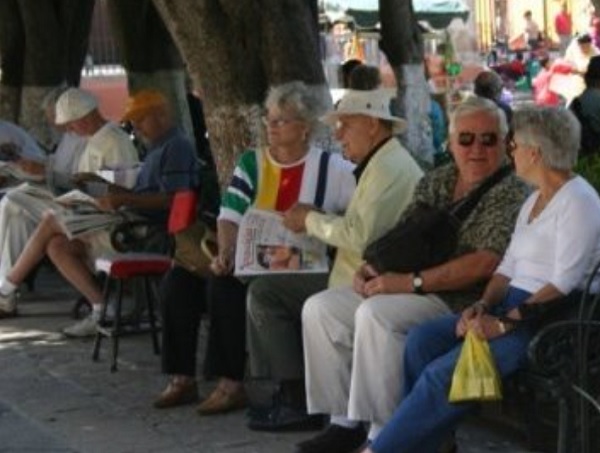 On so many levels we live in interesting times.  One of those levels is the changing face of ex-pats in San Miguel de Allende.

The topic of foreigners in town has spewed countless articles with outrageous claims from San Miguel de Allende being a gringo Disneyland (by someone who obviously has never been to town, nor Disneyland) to greatly inflated ex-pat population rates.  My observations here are more both on the front-lines and far-reaching.

Namely I’ve noticed a sharp decline in the middle-income ex-pat retirees.  Those teachers, and other government employees, that enjoy that increasingly rare pension providing them steady monthly income.

The top ex-pat earners, normally those that own their own businesses that have a second or third home here, continue to flock to town enjoying all a high-end resort and center of culture has to offer.

Conversely, low income foreign earners continue to shuffle into town which is a bit baffling.  As recently as 2008 one could find an apartment in centro for 300 USD a month.  The foreign tenant then thrust themselves into their artistic endeavors in hopes of being the next Grandma Moses, best-selling author or in-demand jewelry designer.

Those real estate days are long gone.  To find housing that cheap one has to cast a much wider net.  The foreign artists still come to town but live farther afield and have fewer foreigners to sell their art to.

Since, on some level, part of the appeal to being in Mexico is the cheaper standard of living regardless of your economic status, many leave the US tiring of being poor only to find themselves poor in Mexico.  These folks baffle me.  If you want to live cheaply in central Mexico opportunities abound close by in villages like Comonfort or Escobedo.  To place yourself in a resort area catering to Mexico’s top income earners, and some the richest folks in world live in Mexico, appears idiotic.  It is the equivalent of trying to live frugal in the Hamptons during a hot July.

Sometimes we ex-pats are equally oblivious to our standing in the community.  Recently a high-end grocery store opened in town offering a football field length prepared meal section and more booze options than a winning high school football team could tackle.

Still foreigners moaned about the lack of a pet section and since most foreigners, myself included, have pets they predicted the store won’t survive.  Absent in logic was the fact no one would open a store to pander to ex-pats.  We’re too few in number and too cheap as a culture.  The store is for Mexicans blowing into town and too tired to eat out but will pick up a variety of ready-to-eat food for the family and, um, “Mommy juice” before arriving at their weekend rental unit.

How will the changing face of foreigners pan out?

Largely unnoticed I’d imagine.  Tourism was and will continue to be geared to uber-wealthy Mexicans and foreigners that have come to town throughout the pandemic.

Most Canadians have migrated like a monarch butterfly back north for their healthcare and pensioners from the US are more likely to stay there for now.

Foreigner-run charities will continue to face a new reality.  As their non-mission-focused businesses are being closed by the government they lack the pensioners that typically filled their volunteer-run boards.  Low income ex-pats are too busy making soups or art to sell while the high income ex-pats are running their own businesses they’ve long ago realized was their calling.  Only the best managed foreigner-run charities that serve the most clients and donors will survive as donations slide away alongside their once profitable businesses.

Other than that the town will continue to be a historical and cultural haven and heaven for those that enjoy the restaurants, shopping, processions, weddings, fireworks and fiestas San Miguel de Allende is internationally notorious for!