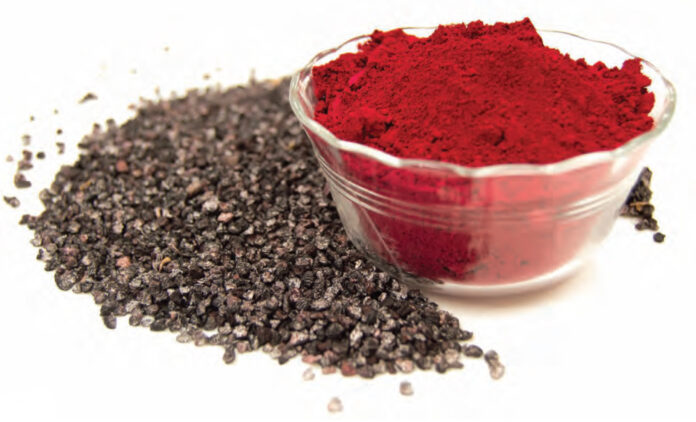 In the past painters got their pigments from nature. For example, raising a family in the Low Country, indigo was the in demand blue dye raised on plantations.

Here in the San Miguel de Allende it was red cochineal, a cacti-dwelling bug that expanded scarlet’s appeal. This particular shade of red reached Europe fascinating painters to become the most imported Mexican product behind silver. How and why did a crushed up bug alter art history?

Red cochineal is a pre-Hispanic color from a tiny bug, Dactylopius coccus, used for both dying textiles and coloring codices since 2000 BC. A precious product, it was part of the tributes the Aztecs demanded from other groups.

Since it comes from a tiny parasite, the process of extraction is an arduous one. The female cochineal stands in the nopal cactus where she is brushed off then left to dry in the sun or heated in a pot. Then the cochineal is crushed to form the red dye.

When the Spanish conquerors arrived, they quickly noticed the bright and intense red in codices and textiles and sent samples back home. It became one of the most precious items that Spanish conquerors obtained from Mexico.  Spain fiercely guarded the new red never revealing its origins (plant? animal?)  thus maintaining a monopoly on the fast-growing market for centuries.

Painters living in European port cities got early access to the dye. Tintoretto was the first European painter to use the red cochineal in his painting, Christ Carried to the Tomb, for the clothes under him. Another Venetian who added the red cochineal to his palette was Titian.

The crushed up red bug was soon associated with wealth, power and royalty. For example, Louis XIV requested the use of red cochineal on the royal bed curtains and chairs of Versailles. The British used cochineal to dye the red uniforms of the army officers, or Red Coats, that were featured in the American Revolution.

Rembrandt included the red dye in his works including The Jewish Bride. Surrounded by a dark background, the woman’s red dress captures the viewer’s eyes.

Mexican painters also embraced the precious red including this painting of the marriage of Mary and Joseph, my favorite subject in early Mexican paintings as it help define the role of Mexican masculinity to this day.

As new synthetic pigments appeared on the market in the 19th century, cochineal dye production decreased. Impressionists like Renoir and Van Gogh briefly brought the bug dye back into popularity but they realized the red cochineal in canvases fades easier than in textiles. To see an Impressionist’s true colors requires digital coloration to display the original look of the painting.

Today red cochineal, like indigo, is no longer a must-have dye and the Mexican lady bug can breathe easy on her cactus home.  Well, unless a Revlon representative is skulking about as the dye is still used in lipsticks, rouges, and blushes.