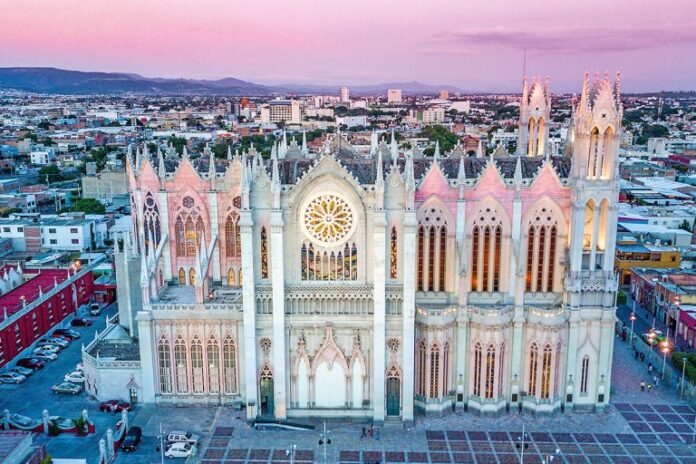 Architecture, legends, crypts, art, and culture are lived in the beautiful and imposing Expiatory Temple of León Guanajuato.

The construction, the stained glass windows and some legends that will surprise you about this immense expiatory temple.

In 1921, Father Bernardo Chávez started a project with the architect Luis G. Olvera that had a neo-Gothic development, with stained glass windows and crypts similar to the architecture of the Middle Ages: The Expiatory Temple of the Sacred Heart of Jesus in León Guanajuato.

After 91 years, Pope Benedict XVI officiated the closing ceremony in 2012, and this 2021 marks 100 years of this fascinating place. Here we tell you other curious and fascinating facts about this wonderful Temple.

Stained Glass of the Temple

Mexican and Latin American design in the Temple

Although the floor of the temple is made of natural granite brought from Brazil, much of its construction is of Mexican design. The design, artistic idea and execution in its entirety were the work of the Mexican Sculptor and Architect José Carlos Ituarte González. The doors of the facade are made of bronze and unique in the Mexican Republic. The racks are made of iron, cast in the city of Monterrey and lined with bronze leaves sculpted in relief with religious motifs.

The Gothic-style Altar is made with two types of marble: white and green brought from Guatemala.

Crypts of the Expiatory

The construction of the crypts are characterized by being a mysterious place, and although they were designed to have more income for construction; The works were interrupted by the flood of 1926, they began to serve again until January 1930, in addition, they were also used as a hiding place for priests and other religious persecuted during the Cristero War in 1929.

There are more than 1,900 crypts where there are human remains of those men who were hiding among the small spaces to save their lives due to the conflict of the Cristeros; in fact, the crypts are narrow, they have little oxygen, you hear a lot of noise and echo of voices all over the place.

Religious tourism of the Expiatory Temple

The Expiatory Temple is one of the most important constructions in León since it is an attraction for the city of León, which stands out for its legends of the end of the world and anecdotes that arise among some people with fear of the unknown and the supernatural. There are narratives, myths, legends and stories that are present in the expiatory Temple; Among the beliefs of the Leonese, it is said that the entire project lasted so long to conclude, that many said that the day it was completed would be? the end of the world ?, 2012, when it was officially completed and that it was designated as the year of the end of times.

One of the most emblematic pieces is the bell, the main one, which weighs two and a half tons, is made of bronze, tin and silver. It was removed from its old bell tower in 2006 to the extreme right of the facade.

The Expiatory Square is a project that the city waited for more than 20 years and complements the Poliforum-Center Tourist Corridor. The laying of the first stone was on December 10, 2008, and it was inaugurated on September 18, 2009. This square has been the scene of important events, and the building is even the canvas of a video-mapping show where the architecture blends with colors and textures at night.

Diocesan Expiatory Temple of the Sacred Heart of Jesus