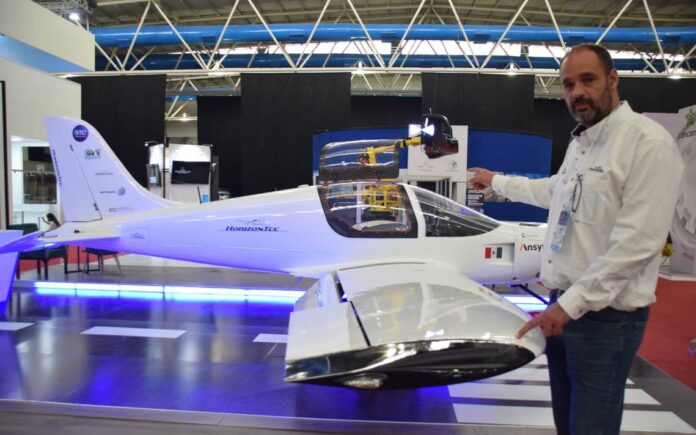 The company will be located inside the Celaya Airport and will manufacture the Halcón 2 aircraft, for recreational and sports use

Celaya.- With an investment of 10 million dollars, the first stone was laid for Horizontec, the first company to produce Mexican aircraft in the country and which will create 140 specialized jobs.

The company will be located inside the Celaya Airport and will manufacture the Halcón 2 aircraft, for recreational use, sports, aviation schools, or for security tasks.

Horizontec started in a carpentry workshop in Mexico City and seven years ago was in the dilemma of where they could be installed, in the end, they decided on Guanajuato.

The governor of the state, Diego Sinhue Rodríguez Vallejo, pointed out that with the installation of Horizontec, the aerospace industry in Guanajuato continues to consolidate and stressed that it is a 100 percent Mexican aircraft, and that one has not been manufactured in Mexico for 70 years.

At the event held at the Celaya Airport hangar, where the Halcón 2 Aircraft will be manufactured, Giovanni Angelucci Carrasco, director of Horizontec and vice president of the Guanajuato Aerospace Cluster, said that this is an important event because now they will have a house for continue with your projects.

Horizontec is a company that has to its credit the manufacture of the first aircraft made in Guanajuato: the Halcón 1 two-seater aircraft, whose design and manufacture had to go through many challenges and finally on September 30, 2017, made its first flight and completed the program of certification tests to guarantee airworthiness criteria.

On March 4, 2020, he received his certification from the Federal Civil Aviation Agency (AFAC). After Halcón 1, Horizontec presented Halcón 2, which is a two-seater sports aircraft that can be used in 3 types of missions: basic training, to train the next generation of pilots in Guanajuato; recreational flight, for those who are passionate about flight; and for aerial surveillance, for reconnaissance and security flights.

he Halcón 2 is designed to respond to the needs of Mexican aviation. Offering competitive advantages such as efficiency, flight hour cost, ergonomics, ease and safety when piloting. In addition to the quality of its materials and the design of its construction”, reported Rodríguez Vallejo.

“Iam very happy because with the installation of Horizontec, the aerospace industry in Guanajuato is consolidated, we are beginning to talk about our state, before it was just Querétaro in aerospace and now Guanajuato we are getting into healthy competition and we raise our hands with the production of this first Mexican plane that is going to be produced in series and will be proudly from Guanajuato”, he affirmed.

During his speech, Mayor Javier Mendoza pointed out that this day is a historic event for the municipality, for Guanajuato and for Mexico.

“In Celaya we are pleased with the installation of Horizontec, because it represents the first project focused on the manufacture of the first Mexican aircraft. With Horizontec our municipality is at the forefront of aeronautical innovation and of course we recognize the work that the aerospace cluster has had in Guanajuato, this sector that has great growth potential, which has a great projection in our entity”, said the mayor, in his message.

He pointed out that the municipal government will be a facilitator for this company to consolidate, bear fruit and be an anchor for other projects such as aeronautical schools and other services.