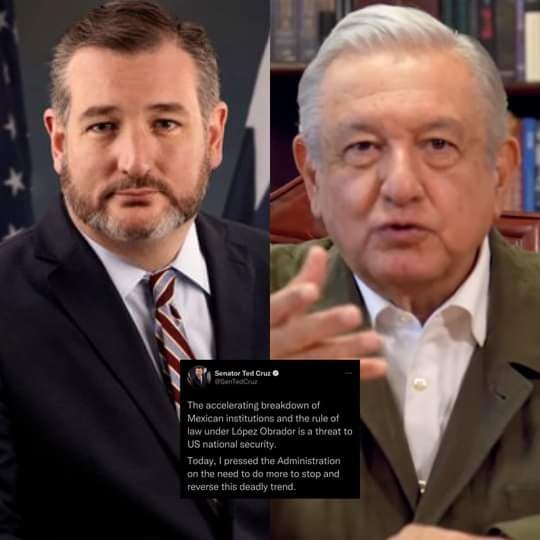 The US legislator assured that the current climate faced by communicators and politicians in Mexico “is the deadliest in history.”

AMLO considered that the conservatives in Mexico are traitors to the country, so it is not surprising that they have sympathy with Ted Cruz.

President Andrés Manuel López Obrador criticized this Friday the Mexican conservatives who support the vision of the Republican senator from Texas, Ted Cruz, who sees the country submerged in chaos due to violence.

In a press conference from Ciudad Juárez, Chihuahua, the federal president said he was proud that a legislator of the stature of Cruz criticized his government project since it is focused on serving the most vulnerable in the country and not the elites.

“It is natural that this senator from Texas, who does not agree with us, expresses himself as he did, he is against the policy that we are carrying out in favor of the people of Mexico and the defense of Mexicans who live and work honestly. in the United States, it is to be expected.

“The Mexican conservatives, who have historically stood out for being traitors to the country, they are happy and support these statements, but it is normal for this to happen because I have been saying it, half measures, simulation, are no longer allowed,” he said. the federal president.

Yesterday, Senator Ted Cruz warned the Joe Biden administration that the Mexican government is abusing its power, putting the rule of law and the relationship between the two governments at risk.

“I am deeply concerned about the deepening of civil unrest in Mexico, and the collapse of civil society. The breakdown of the rule of law on our southern border poses serious challenges and dangers for the national security of the United States on issues ranging from the fight against drug trafficking to illegal migration,” Cruz said yesterday while participating in the Foreign Relations Committee of the US Senate.

“(López Obrador) seems to be allowing himself to abuse power, regardless of the effect on Mexico or on relations between the US and Mexico,” he considered.

The President of the Republic has been in frank confrontation for a few weeks with a part of the journalistic union, specifically with Carlos Loret de Mola and Mexicans United Against Corruption and Impunity (MCCI), after the dissemination of a report linking José Ramón López Beltrán, son of the president, with a Pemex contractor firm, Baker Hughes, for having rented him a luxury house in Houston.

The Mexican ambassador to the United States wrote a letter to the senator in which he invites him to “expand his vision” of our country.

Republican Senator Ted Cruz said there is a “rupture” of civil society in Mexico, which has been aggravated by President López Obrador’s attacks on the press. He also condemned the murders of journalists and politicians that have occurred in our country in recent months.

In response, the Mexican ambassador to the United States, Esteban Moctezuma Barragán, wrote a letter to the senator in which he invited him to ‘expand his vision’ of our country.

Regarding the murdered journalists, he affirms that President Andrés Manuel López Obrador himself has condemned these acts, in addition to the fact that there is progress in cases such as the murder of Lourdes Maldonado and that of Heber López.

He said US officials have recognized that security is a joint issue that must be addressed cooperatively.

What did Ted Cruz say?

The Republican senator referred to Mexico during the Senate Foreign Relations Committee hearing. The senator questioned Brian A. Nichols, Under Secretary of State for Western Hemisphere Affairs.

I want to spend my remaining time on Mexico, Mr. Nichols, as you know and we have discussed, I am deeply concerned about the deepening of civil unrest in Mexico and the breakdown of civil society there, the breakdown of the rule of law throughout our The southern border poses acute national problems, security challenges, and dangers to the United States on issues ranging from counternarcotics to illegal immigration.

President López Obrador seems hell-bent on making all of these trends worse. On Friday he used his morning press conference to intimidate one of Mexico’s high-profile journalists, Carlos Loret de Mola.

He disclosed private financial information and asked authorities to investigate it, he appears to be indulging in the abuse of power regardless of the effect on Mexico or US-Mexico relations.

So far, Ted Cruz has not commented on the response from the Mexican Embassy. During his participation in the Committee on Foreign Relations of the US Senate, the Republican senator affirmed that the security of his country is at risk due to the collapse of the rule of law in Mexico, which he attributed to an abuse of power by López Workshop.”What steps is the Joe Biden administration taking to convince the López Obrador administration that its behavior is undermining the rule of law and that it threatens the security of the United States and that of its border with Mexico?” Cruz asked.