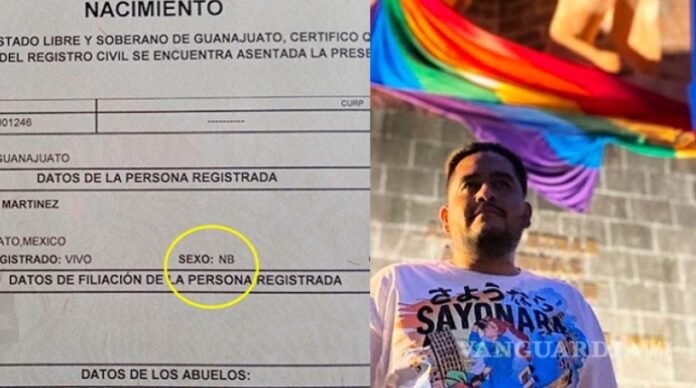 Fausto, a 26-year-old gay activist, whose pronouns are ‘he or she’, obtained a birth certificate in the state of Guanajuato where the genre or sex indicates “NB” (non-binary), instead of male or female; she/he would be the first person in Mexico to acquire this type of status.

“It is a collective achievement of non-binary people in Mexico, that our existence is legally recognized with all that that implies, making us a legal entity with rights and obligations,” Fausto said.

It happened in Guanajuato, where the State Civil Registry certified the document for the first time in the country’s history, after an injunction trial.

This process began on September 24, 2021, when Martínez asked the National Electoral Institute (INE), which has a protocol for transgender people, for a voting card that indicated “NB” in the “sex” section.

Faced with the rejection of the INE, since they did not have an “official” document that corroborated the gender, Fausto, with the support of the Amicus association, obtained the protection of the judge, which was fulfilled on February 11, 2022.

The Civil Registry has a gender identity law where trans people are allowed to rectify their gender in any official document.

And, although the Supreme Court ruled in 2018 that “gender identity is a constitutive and constituent element of people’s identity, so its recognition by the State is of vital importance”, this is the first time that issues in Mexico an act for someone non-binary.

“This is a result that occurred in Guanajuato, but what we want is for it to be a simpler procedure than carrying out an injunction trial and everything that entails spending time and money, and we anticipate that it will be like this, that more people are interested in the subject”, stressed Fausto.

On the other hand, and regardless of legal advances, as well as opportunities for LGBTTTQIA+ people, Mexico is the second country in Latin America where homophobic-transphobic violence prevails the most, after Brazil.

Fausto, for his part, recalls that “it is important because we continue to suffer from violence and at the moment of making it visible, it contributes to the public discussion of the issue. We have been very polarized both on the issue of inclusive language and the very concept of gender in general.”

It is important to mention that Argentina was the first country in Latin America to approve changes in official identities, specifically for “non-binary” people.

Alberto Fernández, president of Argentina, had already signed a decree that includes an ‘X’ in National Identity Documents and passports that represents non-binary people.