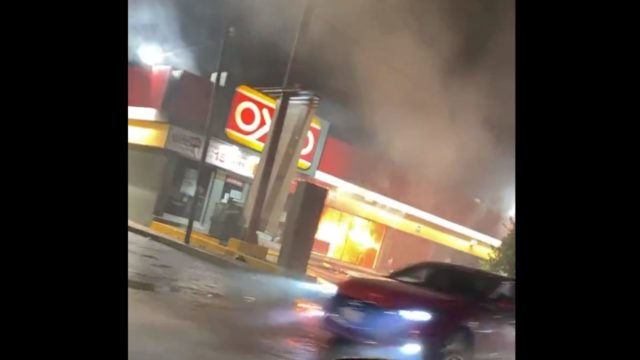 Drug cartel members set fire to 25 shops owned by Latin America’s largest convenience store operator as they clashed with the military in the streets of central Mexico, a sign of the destructive scope of narco gangs in the country and the limited capacity to contain them.

The Oxxo stores, owned by Fomento Economico Mexicano SAB, were partially or completely burned down during the confrontations on Tuesday night in the state of Guanajuato, the company said in response to questions. No workers or clients were hurt, said Femsa, as the company is known.

Members of the well-armed and brazen Cartel Jalisco Nueva Generacion blocked roads and lit fire to cabs, buses, and stores in the states of Jalisco and Guanajuato after the military detained top cartel members, President Andres Manuel Lopez Obrador said during his daily press briefing on Wednesday. Authorities have reported that homicide rates have been slowing this year, but violent incidents by cartels continue to rock the country.

Femsa said it’s collaborating with authorities regarding Tuesday night’s incidents. The company had 20,196 Oxxo stores in Mexico alone at the end of July, according to its latest earnings report.