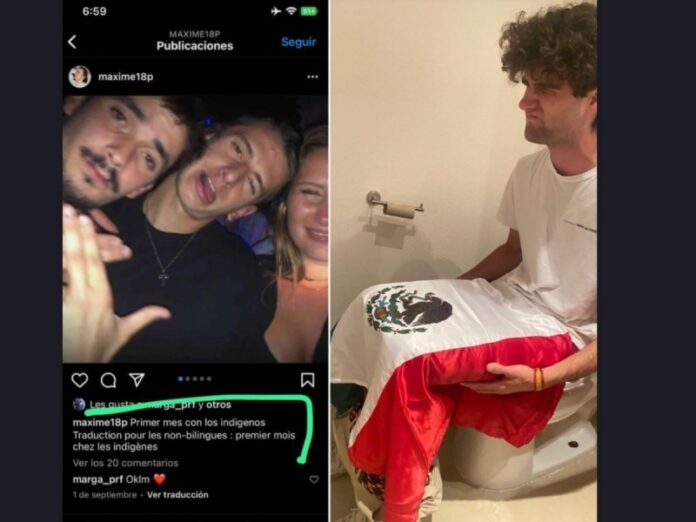 Two students of French origin who were on an exchange in Mexico at La Salle Bajío University in León were expelled and will return to their country, where a sanction awaits them.

The young people found it funny to share offensive photos that Internet users described as “racist”, since they referred to their colleagues and inhabitants of the country, as “indigenous”.

In another of the images that caused the most discomfort, one of the French can be seen using the Mexican flag while going to the bathroom.

The annoyance in social networks spread to the extent that they requested the intervention of the Ministry of Foreign Affairs and other organizations in defense of human rights.

The university clarified that they are part of a group of students of French origin, who did not participate in the mockery of Mexicans.

This is the statement:

“Derived from the publications made on social networks by two students from France yesterday, we inform you that institutionally, based on the General Academic Regulations for Higher Level Studies, we have made the decision to terminate the exchange process. of these young people; they return to their institution of origin, where they will receive the corresponding sanction.

“As a Lasallian university, coexistence in harmony and respect for others is a priority, and in our community there can be no room for expressions that imply any degree of discrimination, racism or intolerance. And it is important to mention that at this time there is of international exchange in our university a large group of students who did not incur in disrespect, so they deserve to be treated with the same cordiality as our visitors.

“We have worked to include in our daily coexistence and in our own study plans, an intercultural vision to train comprehensive professionals with a global vision.

“In today’s world, these types of expressions cannot be allowed, we will continue to be vigilant so that our university and our environment become safe spaces for everyone.

“Because what is united remains.”

The user who uploaded the images to Facebook said:

“Our esteemed exchange students have already been sanctioned, they were dropped from their exchange with the university and are going back to their country of origin. The 2022 cake war was won. How do you see these French exchangers from Lasalle León? I say that we share the photos until they reach Marcelo Ebrard. “Whoever violates the coat of arms of the Republic or the national flag, whether by word or deed, will be subject to six months to four years in prison or a fine of fifty to three thousand pesos or both sanctions, in the judge’s opinion” .

What do you think? Should they have been punished by law before leaving?

In a private group, one of the foreign students apologized, saying he was sorry for what happened.

In the message he wrote: “The message is to apologize for what happened, the two photos of my accounts and my friend were clumsy on our part.”