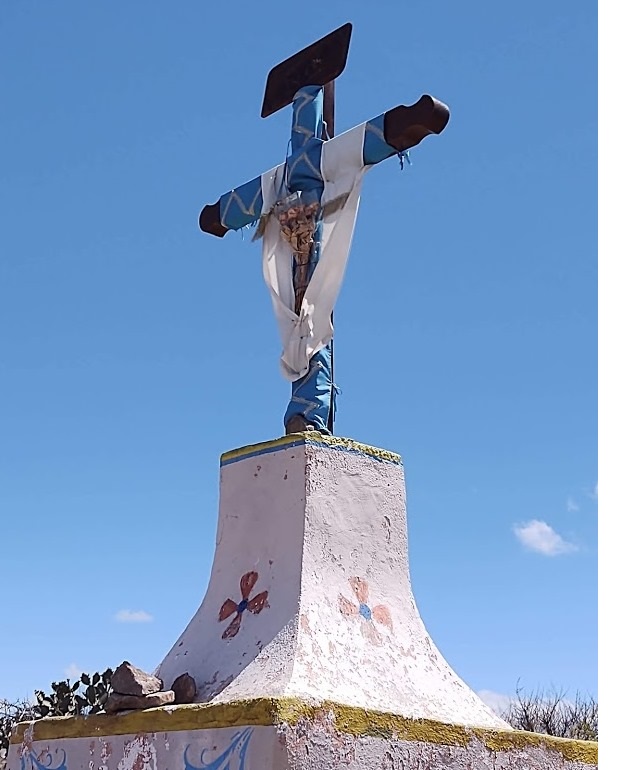 There is a lovely new church and park in the village of New Pantoja that is located beside La Comer and cuts across the highway to border the neighborhood of Allende.  New Pantoja is considered the nearest village to San Miguel de Allende.

The original/non-new Pantoja, called Pantoja, is a ranch area folks moved to when the dam was finished in 1969 from villages then known as San Marcos and Flores were flooded in forming the lake.  Many families moved closer to the railroad and highway to be on dry land and began the brick factories.

Bricks are made from sawdust, hay and a copious amount of livestock dung.  Mixed together then fired in huge ovens the bricks are dried and then sold all around town for construction projects.

New Pantoja started with the formation of their own brick factories mimicking the original Pantoja, where Mexico was officially proclaimed independent from Spain on St. Joseph’s Day 1821.

The multi-layers, lush park in New Pantoja is called Liberty Plaza in honor of Josefa Ortiz de Domínguez, wife of the Spanish-appointed mayor of Queretaro.  Mother of 14, she opposed the oppressive Spanish colonial government in favor of the indigenous and mixed races.

Organizing political meetings under the guise of book clubs she became pals with Miguel Hidalgo y Costilla and Ignacio Allende.  She, despite under arrest, got the news that Spaniards were aware of the plans to Hidalgo and Allende officially starting the War of Independence.

In murals around town depicting the War for Independence she is the only character seen twice, often facing each other as she is the only insurgent to survive the war and experience Mexico once it was free from Spain.

Along with her sculpture (where the wind appears to be blowing from opposite directions at once), a fountain, trees and flowers the park includes a state of the art playground and benches with Allende’s crest as seen outside his home in the jardin.  Basically it is an announcement that Allende was born here and is known everywhere.  The benches also feature the sun over a nearby mountain.

At the top of said mountain New Pantoga backs up on is a sacred cross the church was named for, Cruz de la Peña, or cross on the rocky mountain.  On the third weekend of May, the month of the cross, this cross comes down the mountain in a pilgrimage for repairs and venerations featuring week-long parties.

My pal and I tried to reach the cross from New Pantoja and just couldn’t master what path would lead us up the mountain to it.  So instead we approached from behind via the road to Alcocer (a village behind the mall alongside the new hospital) and, kind-of, snuck up on the sacred cross.  Offering panoramic views of town, New Pantoja, the lake, La Comer and alike it is easy to see why the ancient Toltecs considered every mountain top to have its own deity.

Enjoy your May in San Miguel de Allende, the center for the cult of the cross and the most fun place to be despite the heat and pandemic!