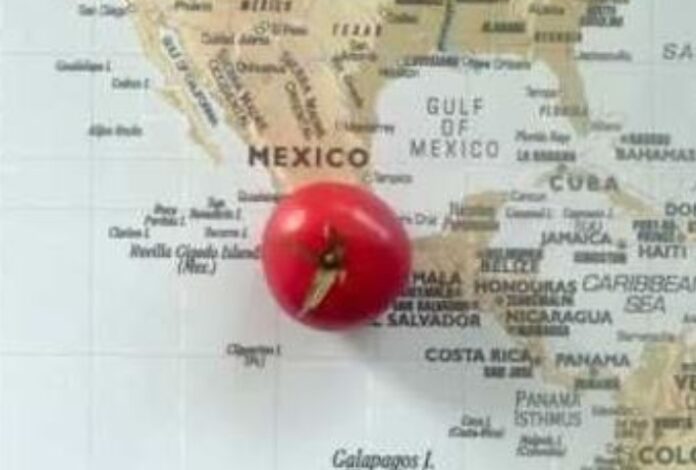 The tomato has been around forever!  The most used fruit in international gastronomy, essential for Italian and Mexican cuisines, started domestication and exportation here in Mexico which still rules the international market.

The tomato started 2,600 years ago in the Andes in present day Peru and Ecuador but was considered a weed.  Brought up into Mexico where the tomato was cultivated on small islands and domesticated with intent around 500BC.

The green tomato, which is still used in many Mexican sauces, was used in pre-Hispanic cuisine.  Also, the tomato was used by the indigenous to relieve sore throats, headaches, digestive problems, ear pain and mumps.

Inquisition Era Mexico featured the Spaniards taking the tomato throughout the rest of world.  Thanks to the warmth of the Mediterranean soil, tomato cultivation prospered and within two decades the tomato started appearing in Italian cookbooks first paired with eggplant.

Unlike chili peppers, the tomato had a sweet taste and was not as hot, which is why this fruit was quickly adopted by Europeans and Africans alike. Well, once Europeans decided despite being in the Bella Donna family, the tomato wasn’t poisonous.

During the 17th century some variant of the Nahuatl name tomatl (meaning fruit with a navel) rapidly became the fruit’s name world-wide.

By the time of Mexican Independence haciendas had irrigated production systems, that combined with the railroads, integrated the different farming regions increasing both the tomato’s production and export.

Today large-scale irrigation systems with the use of chemicals and fertilizers control a tomato’s ripening time and shelf life making Mexico the leading exporter with over half the tomatoes in US grocery stores coming from Mexico.

Properties of the tomato today include:

The next time enjoying salsa and chips, sprinkling on a green sauce or re-watching the cult classic, Attack of the Killer Tomatoes, recall the tomato’s long and complex Mexican history!