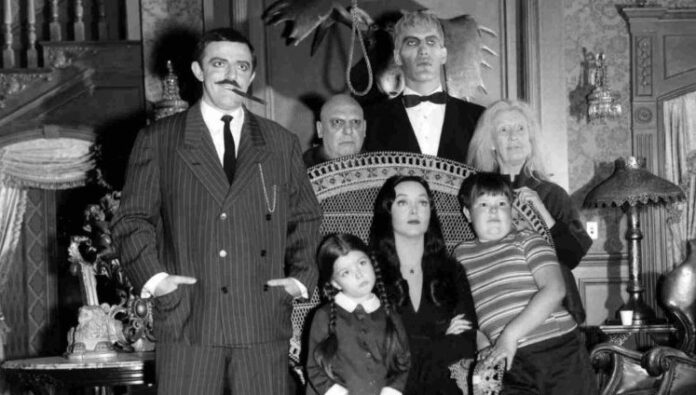 Coming home from a party in a car full of Mexican women we drove through Comonfort just as a thunder storm hit instantly hitting a transformer and plunging the town into darkness.  Walls of rain were too strong to continue driving so we pulled off into the dark and stormy night.

Thinking I’m the only lad so it is time for me to do something manly to break the tension and stress of sitting out the storm.  Naturally, for me, I started singing the theme song to the 1960s TV show, The Addams Family, which everyone knew and joined in complete with finger snaps.  The time waiting for the storm to blow by flew by!

Why, in Mexico, did The Addams Family make such a cultural impact while other TV shows of the era, like Gilligan’s Island, Green Acres or The Ghost and Mrs. Muir, pass by with no lasting impact?  Also, why does The Addams Family have the inexhaustible shelf life of a zombie in various media?

The Addams Family began as a cartoon in the New Yorker magazine by Charles Addams, a thrice married New Yorker with a penchant for wives that looked like Morticia when not dating Jackie Kennedy when she was between husbands.  Charles gathered the cartoons into a comic book called Homebodies that attracted the attention of a television producer.

Actors cast as Morticia and Gomez realized that since they were monsters, they didn’t have to act like other human TV couples and consciously sexualized their relationship.  This is a TV time when Lucy and Ricky slept in separate beds and Mr. Brady only wished he and Carol did!

Even as a child, I realized when Morticia and Gomez stepped out of frame they were tearing each other’s clothes off.  Contrast their behavior to The Munsters that aired at the same time as a competing spooky family sit-com.  Despite starring the sultry, sloe-eyed, movie siren Yvonne de Carlo, she never laid a hand of Mr. Munster as the couple had zero sexual chemistry.

The overt sexuality of the lead actors is the primary reason the show caught on in Mexico.  It was, well, muy caliente.  To this day I can’t hear a woman speak French without, for moment, recalling “Tish, you spoke French!” which is all it took to get Gomez’ notion of foreplay in action with a series of arm kisses.

Sidebar:  The major difference in Mexico for the Addams was the change in names with Gomez/Homer, Fester/Lucas, Pugsley/Pericles, Wednesday/Merlina and Lurch/Largo.  Only Morticia maintained her English name, a play on the word mortician.

The Addams Family, and The Munsters, were each cancelled after two seasons of good ratings.  While studio heads tired of dark family comedies the audiences didn’t.

The Addams Family, following a spin on Scooby Doo, turned into a regular cartoon series starring the voice of then ten year old Jodie Foster.  TV movies followed as did the trilogy of films first starring Angelica Houston (in a role Cher foolishly turned down), Raul Julia and Christina Ricci as Wednesday.  Wednesday was perfect preparation for starring in her own TV series as the axe yielding serial killer, Lizzie Borden, a couple of years later.

As recently as last year The Addams Family were an animated feature film starring the voices of Charlize Theron, Alison Janney and Bette Midler with a sequel expected to be released this Halloween.

In all these versions the characters are spooky and monster-ish, but not actual monsters in looks or behavior.  There’s not an actual witch to be found which is the second reason The Addams Family entered Mexico’s cultural mindset.

Mexican witches are still an active subculture and aren’t known for their good deeds.  In fact, the whole notion of a good witch, a la Glinda, the Good Witch, prevented the Wizard of Oz from making anywhere near the cultural impact it did in the US.  There simply are no good Mexican witches, and no spell-casting witches appeared in the Addams’ world.

Actress/Producer Melissa Hunter created the most successful recent version of the Addams family with a youtube channel dedicated to short films called Adult Wednesday Addams.  Here Wednesday humorously goes about her adult life finding an apartment, a job and a boyfriend.

Melissa felt the series paid homage to Wednesday and fell under the protection of satire laws.  Paramount felt differently and sued the black dress off YouTube’s Wednesday.  Literally, the black dress was all Melissa got to keep for all her hard work on Adult Wednesday Addams.

Last month Netflix announced the creation of their own Adult Wednesday Addams TV show under the direction of Tim Burton in his television debut. I sure hope he casts his Sleepy Hollow actress, Christina Ricci, in the Morticia role.

The droll delivery of the 1960s TV theme song is still reproduced at every camp my kids once attended making the finger snapping a reflex action!  The song’s success in pop culture wasn’t unnoticed by the actress that played Grandmamma, Blossom Rock.

Blossom was sister to opera singer/1930s movie star, Jeanette McDonald, who famously trilled about her love for her Mountie, Nelson Eddy.  Both sisters impacted pop culture and music decades apart and in vastly different ways.

Sidebar:  In central and south America the Broadway version of The Addams Family (the most popular high school musical performed in 2019) has become an opera.

Sex appeal, a lack of witches and a finger snapping song have kept The Addams Family in Mexico’s cultural consciousness for over half a century since its cancellation.  A feat any family, living or dead, can be proud of!