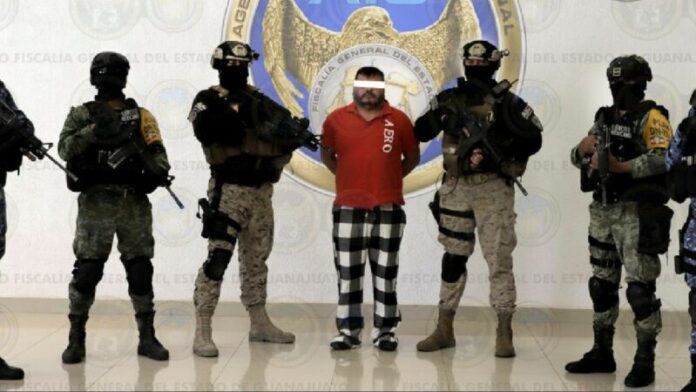 Fernando “N”, also known as the “ Ranchero ” or the “ Kin ”, alleged leader of a cell of the Santa Rosa de Lima Cartel and generator of violence in Guanajuato, was arrested after an operation carried out between federal and state authorities in the municipality of Celaya.

The Attorney General of the State of Guanajuato (FGE), reported the arrest of the alleged boss, as well as announced that he is linked to multiple homicides.

What is known about the capture of Fernando “N”, the “Ranchero”, in Guanajuato?

The FGE detailed that the capture of the presumed leader of the Santa Rosa de Lima Cartel was achieved thanks to the specialized investigation work headed by the Criminal Investigation Agency of said agency, in coordination with the Mexican Army, National Guard, and the Ministry of Public Security of the State (SSPE).

It was with the use of operational intelligence and test data collected in the investigation carried out by the Guanajuato Prosecutor’s Office, which allowed the design of a tactical operation in Celaya, and in conjunction with federal authorities and the State Public Security Secretariat, it was located and achieved the capture of the ” Ranchero “.

What is the hierarchy of the “Ranchero” within the Santa Rosa de Lima Cartel?

“In the structure of the criminal group calling itself the Santa Rosa de Lima Cartel, the ‘Ranchero’ and / or the ‘Kin’ appeared as one of the leaders and various crimes were adjudicated, including multiple homicides”

Specified the Attorney General of the State of Guanajuato

After his arrest, Fernando “N” remained at the disposal of the competent authorities, who will determine his legal situation during the next few hours.

Likewise, the Guanajuato Prosecutor’s Office maintains open investigations and thus determines its probable participation in different crimes committed in this region of the state.

The capture of the ” Ranchero ” was classified as of utmost importance by the authorities since it will give continuity to the following investigations of various crimes.