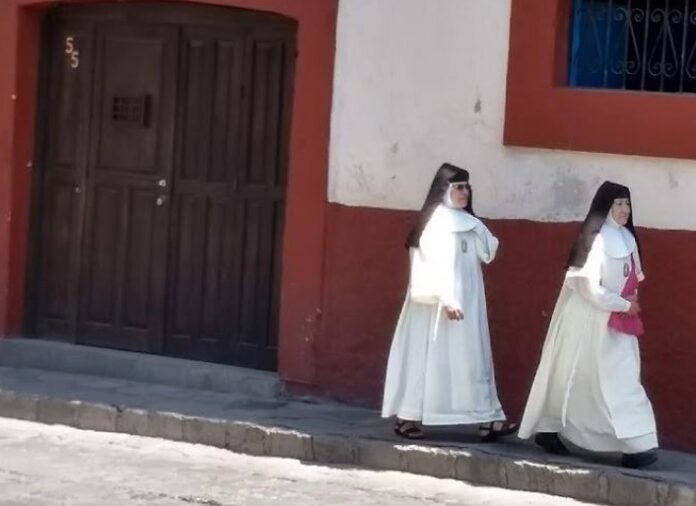 The most important thing to remember about becoming a Colonial-era cloistered nun in San Miguel de Allende was that it wasn’t necessarily a religious calling.  If you were a wealthy Spanish woman that didn’t want to marry nor be a mother, or you simply wanted to be well educated, cloister was the way to go.

You could buy your condo in what is now the Bella Artes, bring your staff along to care for you daily and spend your days immersed in whatever interested you, safe behind the convent’s walls.

Exactly what did cloistered Colonial-era nuns do all day?  Art occasionally surface from the era depicting reminders of what a cloistered nun’s daily life was about.

For all the restrictions convents placed upon their inhabitants, they also gave women opportunities to pursue vocations of both the spirit and mind. For example, within convent walls Sor Juana Inés de la Cruz composed the most ingenious and feminist poems in the Americas centuries before Emily Dickinson was born.

In several nun-centric paintings, the emphasis is on the woman’s encounters with sacred images.  Within a convent’s walls a cloistered nun could become obsessed with sacred paintings and sculptures as the images functioned as books for the illiterate, often including nuns.

Nuns learned lessons from the images and while strictly limited in their social contact, nuns relied on the images for spiritual comfort and companionship.  The Virgin functioned as a heavenly mother for their real mothers they left outside the convent walls.  The Christ child image represented babies that needed cradled, dressed and calmed that they had opted to not birth.  Yet, at the same time, nuns were brides of Christ, an odd allegory of wife and mother representing both a nun’s earthly and spiritual families.

For example, here is a portrait of Maria Ignacia de Azlor y Echeverz (1715 – 1767) who founded an order in Mexico City not to solitude but running a school for girls.  Her desk and hands feature office supplies and a letter from the Pope approving her attempts to educate women.  Having taken a vow of poverty her décor is sparse except for an image of St. James, an apostle believed to play a major role in the conversion of the Mexican indigenous to the Catholic faith.

Convent life mirrored the social stratifications of the secular world with wealthy convents admitting only women of upper nobility while poorer convents included divorcees, former prostitutes and peddlers.  Life in a convent mirrored social hierarchies beyond the convent’s walls.

For example, skin color determined a woman’s station and even the color of her veil.  At the top of a convent’s pecking order were professed (taken final vows) nuns and those with sizable dowries known as black veiled nuns.

Then came women waiting to take their final vows but without dowry funds, known as white veiled nuns.

Beneath them came servants, women of color, who worked in the convent followed by slaves that had no choice about entering religious life if only to serve.

Indigenous nuns couldn’t actually become black-veiled nuns until nearly two centuries following the conquest.  Even then convents that allowed them to become full-on nuns were founded and led by lighter skinned nuns of European descent.

A nun’s life revolved around rituals of fasting, feasting and preparing meals.  Nuns with a vow of poverty ate little, and mostly bland, vegetarian meals to repute the inherent sinfulness of their bodies.

Still other orders made food the center of celebration and hospitality cooking elaborate and costly meals on major feast days.  It was in a convent the patriotic Chiles en Nogada was created.  Some convents sold sweets while others marketed their actual recipes in cookbooks.

Our cloistered convent in San Miguel de Allende is known internationally for their eggnog, locally for their moist tamales and nowhere in the world for their wickedly dry cookies.