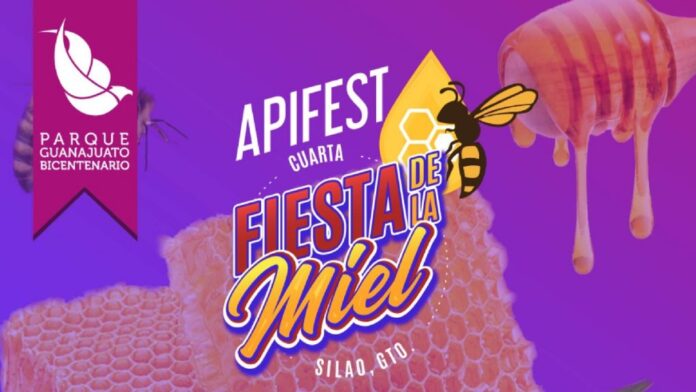 Silao, Guanajuato. “Apifest” will celebrate its 4th. Honey Festival, on Saturday, July 31 and August 1, from 10:00 in the morning to 7:00 in the afternoon, with the aim of raising awareness among the population and visitors about the importance of bees and their relationship with the environment.

Francisco Javier Valverde Polin, general director of Planning of the Secretariat of Tourism of the state of Guanajuato, announced together with José Luis Pérez Chávez, organizer and president of Alta Producción Apícola (APA) for the Bajío; and Carlos Oscar Domínguez, director of the Guanajuato Bicentennial Park, the details of this event that promotes the consumption of honey and the by-products of the hive.

“In the state, there are 40 thousand beehives with an estimated production of 359 tons per year. Guanajuato, nationwide, ranks 8th. place in agricultural production with a volume of 8.69 million tons, which depend on pollination in a significant way ”, reported Valverde Polin.

In “Apifest”, a 100% family event that will be held in Parque Guanajuato Bicentenario and that will have activities for all ages, attendees will learn about the wonderful world of bees and their role in the environment through workshops, talks, exhibitions. and gastronomic and artisan sales; In addition, the program will be enriched with folk dances and artistic shows.

Bee tourism or apitourism is an alternative form of tourism intrinsically linked to the art of beekeeping and the life of the bee. This particular type of tourism offers unique experiences to tourists directly related to nature, wellness tourism, and gastronomic tourism.

“Without bees, there is no life, there is no food. From APA Bajío we work responsibly and produce in the state of Guanajuato one of the best kinds of honey in the center of the country. In the Mexican Republic, there are 16 certified plants that export honey, and APA is one of them, the only one in the state, ”said Pérez Chávez.

In this sense, he pointed out that they develop apitourism experiences in the honey extraction plant of APA del Bajío in the community of Duarte, León, such as the experiential honey and mead beer workshop, offered by the Mielot house; the Sanctuary of the Bees (to be opened).

As well as the experience of Montaña de Miel de Api-Embe, in the mountains of Guanajuato capital; and the experiential workshop on beekeeping products developed by Beekeepers “El Arenal”, in the state capital. The information can be found on the Facebook page apicolaagricolabajio.

The state of Guanajuato has a unique opportunity since this event is registered as the first bee tourism product in the entity.

“What a pleasure to host this type of event, which promotes awareness about the importance of bees and their relationship with the environment, in PGB, a space that has distinguished itself by developing events not only of quality but with social responsibility,” he concluded the director, Oscar Domínguez.