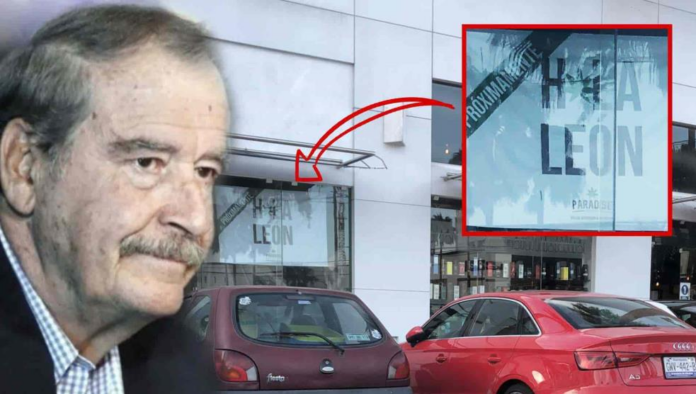 The former president of Mexico, Vicente Fox Quesada, presented his first marijuana-derived products store in the city of León.

The store will be called Paradise and will be located in the Las Palmas shopping center, next to the Basque restaurant D´Jordis, according to what Vicente Fox announced in an interview with the journalist Guillermo Villegas, from TV4.

In the same place there is already a sign that says: “Coming soon. Hello Leon . Paradise “.

The marijuana products store will open its doors in León on August 5, according to Vicente Fox himself.

In total, Fox and its partners will have more than 40 marijuana derivatives stores across the country to start up.

“There are already 40 stores that sell everything and everything absolutely legal and authorized by Cofepris, both the store and the products that the store sells. There is nothing illegal,” said former President Fox, in an interview.

Vicente Fox’s partners in the sale of marijuana products are actor Roberto Palazuelos and Monterrey businessman Marcus Dantus, creator of the Paradise concept.

The store will sell marijuana oils, balms, creams, and supplements derived from CBD, one of the cannabinoids that make up the marijuana hemp plant. The CBD has allegedly properties for healing and relaxation.

“The ribbon-cutting is planned for August 5,” said Vicente Fox.

The store will also sell pipes for the consumption of the products.

The Government of Mexico has advanced legislation to authorize the consumption of marijuana and its derivatives for medicinal and recreational purposes.

The former president of Mexico reported that at the moment more than 20 Paradise stores are open throughout the country and the project intends to start more than 40 legal points of sale.

The former president of Mexico, Vicente Fox Quesada, has been a promoter of the legalization of marijuana in Mexico and the authorization of the sale of products derived from the drug.

In recent years, Fox has organized the expo marijuana in Rancho San Cristobal, with the participation of entrepreneurs Mexicans and Americans who are ready to begin the industry legal in Mexico once reforms are made legal.

Vicente Fox has been a partner of Paradise since October 2019. The brand has stores already opened in Sayulita and Nayarit.