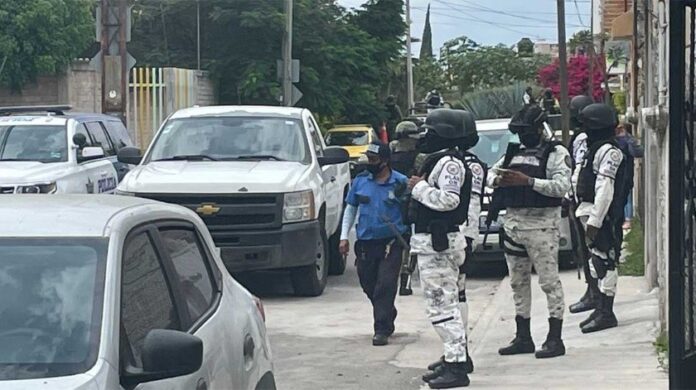 Guanajuato lives 72 hours of violence, with executions, dismemberment, and two deceased minors, adding a total of 46 people killed in a single weekend.

Guanajuato.- The violence does not stop and sinks Guanajuato, which lived the bloodiest weekend on record, with 46 people killed.

In the first of the houses, the rescuers found a person dead and another injured, the building was set on fire by the attackers after shooting the victims. Soon after, another house began to burn.

Later, residents of the Guerrero Prolongación, at the exit to Salvatierra, heard gunshots, two people were left dead in the middle of the street.

At noon, in San Francisco del Rincón, two men and a woman were murdered when they arrived at a house in the Capellanía neighborhood.

Also yesterday, in Irapuato, a young man was executed in his own home and a 17-year-old minor died, involved in a shootout between motorcyclists that occurred on Saturday.

In the shooting, as AM reported yesterday, a 10-year-old boy who was part of a funeral procession was killed.

The violence had started early on Saturday as well, the dismembered corpses of four people were thrown on Irrigation Avenue, in Celaya.

They were left in black bags, with cardboard from a criminal group.

Also on Saturday, two people lost their lives after being attacked in the parking lot of the Public Security Directorate of Salvatierra.

The victims had just been released after being detained since Thursday.

They were getting into a vehicle when two people on a white motorcycle shot them.

At night, a man and a woman were executed on a dirt road located at the back of a furniture factory in Silao.

On Friday, in San Miguel de Allende, the dismembered bodies of three men were found in the morning, on the side of the highway to Dolores Hidalgo.

That same afternoon, two men were murdered in a bakery in the Los Pinos neighborhood, in Celaya.

From Friday to Sunday there were also murders in Tarimoro, Villagrán, Apaseo el Alto, Cortazar, Valle de Santiago and León.

In our municipality, yesterday was the first day without intentional homicides since Alejandra Gutiérrez Campos took office last Sunday.

During the whole week, there were 22.

Just over two months ago, from Friday 6 to Sunday 8 August, AM registered 40 murders, the product of several attacks and three massacres. But these 72 hours that have just passed were more violent.

They appoint federals … or remain without command

Six of the most violent municipalities in Guanajuato have left their security in the hands of commanders from the Federal Police or the National Guard.

Among them, only León ratified the Secretary of Security, Mario Bravo Arrona, in his position. And in the case of Irapuato, Miguel Ángel Simental arrived at the post, who previously had the same responsibility in Celaya, where another former member of the Federal Police entered his place.

In contrast, several other municipalities have not yet appointed their security manager, despite the fact that four months have passed since election day.