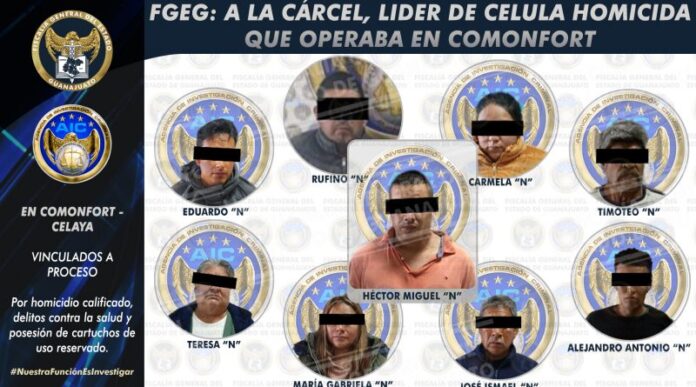 The gang of extortionists operated in Comonfort and Celaya, Guanajuato. They are linked to at least 13 homicides. Its leader was a former Comonfort police officer.

Guanajuato.- The Attorney General of the State of Guanajuato captured and prosecuted the former Comonfort preventive policeman, Héctor Miguel “N”, leader of a criminal group, for the crime of aggravated homicide. His gang of extortionists of him is linked to at least 13 homicides.

During the hearing, his second-in-command, Eduardo “N”, and other subjects who operated the sale of drugs, theft of vehicles with violence, extortion, and homicides in the municipalities of Celaya and Comonfort were also under investigation.

The Specialized Investigation Prosecutor of the State Attorney General’s Office managed to identify the leader of this criminal group, and he was arrested with 15 of its members, who were part of an organized crime organization, based in Santa Rosa de Lima, in Villagrán, currently disjointed.

Due to the intervention of the FGE tactical elements with the support of assets from the State Public Security Secretariat, the National Army, the National Guard, and intelligence teams, in various interventions carried out in Celaya and Comonfort, 13 firearms were seized. and 11 motor vehicles.

The foregoing, as a result of various searches, carried out in various points of both cities.

How did the extortion gang operate?

In the case of Comonfort, the criminal cell led by Héctor Miguel and Eduardo in their capacity as elements of the municipal police manipulated security and used official units, which allowed them to enter and leave the town to commit crimes.

This group had various guards at the entrance and exit of the city to the towns of Empalme and Neutla, they also had safe houses where they protected their victims to assassinate them, as well as the vehicles and weapons used to commit crimes.

As for Celaya, they operated properties where they hid the loot from their robberies. The investigators obtained routes of exit, access, and arrival of the defendants to the clandestine buildings, for which the capo and his accomplices could be arrested.

The detainees had short and long weapons in their possession; drugs known as crystal blue; cash, vehicles, motorcycles, and 8 properties were secured.

Two former Celaya police officers, Oscar, 28, and Karla Salome, 25, were sentenced to 157 years with 6 months in prison for the crime of attempted murder against seven members of the State Public Security Forces. on February 2, 2020.
The former police officers “supported” the aggression of armed civilians who shot at state officials and detonated them, the FGE described.

On the day of the events, Karla and Oscar were on municipal police duty aboard a rural police unit; Both were following two units of the State Security Forces, where 7 elements were traveling that carried out prevention and surveillance patrols on the Pan-American highway in the Cortazar-Celaya section, at the height of the 2nd Fraction of Crespo.

When the state elements passed by the Repsol gas station, they realized that the official unit was following them and they observed that, on the other side of the road, there were two vehicles at full stop, a black truck, apparently a black Tahoe type, and a Spark vehicle. red, with several armed subjects on board.

Suddenly, the criminals detonated the state police officers, who repelled the attack, while the officers stopped their patrol a hundred meters away, got out of the unit and, with their 9-millimeter weapons, joined the attack against state agents. Two of the state troopers were injured.

Other FSPE police managed to arrest and disarm Oscar and Karla, while the civilians fled towards Cortazar.