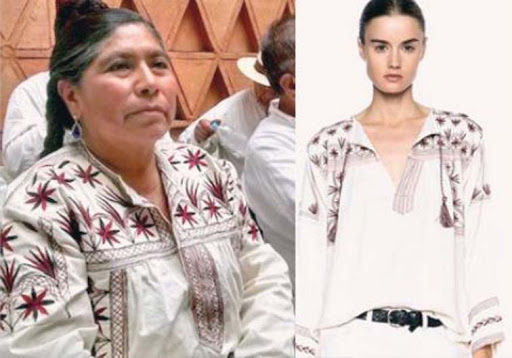 At the start of the virus I created an adult coloring book based on the Otomi-made Mexican Maria dolls that found sponsorship with both Unicef and National Geographic.

Recently I was asked to produce a similar project with Otomi embroidery.  I declined feeling though I had raised funds through the dolls for the indigenous, I didn’t see the embroidery having a similar market potential.

Otomi is the name for indigenous farming tribe here when the Spanish arrived in 1530 and still around.  (Otomi is also the name for the huge horse-focused housing development.)  The women selling the Maria dolls around town are Otomi as are many vendors featured at the Artists’ Market.  Here you can still hear the now-dying off Otomi language as the country-wide population of Otomi hovers around 300,000.

Otomi embroidery is said to be inspired by ancient cave drawings here in central Mexico including two sites in San Miguel de Allende.  Common motifs are vibrant, rainbow-colored flora, fauna, animals and symbols representing fertility, nature, and spirits that serve as intermediaries between our world and the next.

Despite being around since Mesoamerican times the craft really kicked into high gear in the 1960s when an economic crisis forced some Otomi to switch from farming to traditional crafts for economic survival. The main differentiator in the art was incorporating the white cotton cloth still used as a backdrop in most pieces.

The process of creating Otomi embroidery is intricate involving hand-drawn Otomi designs which are later hand-embroidered.  Depending on the size a textile piece can take up to a year to create.

No longer the domain of women, male prisoners learn the craft to produce pieces then sold in local craft shops.

I’ve a quilt that I hung in my son’s bedroom and when he was sick we examined the quilt creating stories to explain what we were seeing to distract him.  With my daughter’s recent engagement I’ve been sending her Otomi wedding dress images to encourage a local wedding in the same mermaid cut her mother once wore.

Back in 2016 Vogue stated Otomi was the “next textile trend to watch.”  Apparently Vogue was right.  Otomi embroidery can be found on most anything from clothing to wallpaper.  Otomi designs are found for sale on Amazon, Ebay, Target and Etsy.

Fashion Designer Carolina Herrera used the Otomi designs in some of her product lines without acknowledging or compensating the Otomi causing an international incident.  When writing about it at the time I was surprised how many readers felt “borrowing” another’s design in the fashion world was a-ok.

The controversy motivated Mexican law to be more supportive of indigenous crafts and designs.   However, these laws only apply in Mexico.

I think one of the most attractive uses of Otomi table settings is at the Rosewood with each table being a different color.  Not to be outdone, the Hotel Matilda features an entire mural.  Meanwhile City Market, the large grocery store, has china with the Otomi design on both white and black backgrounds.

For fantasy and fun, it is hard to go wrong with including both the Otomi’s two great claims to design fame – the Mexican Maria doll and their colorful animal look in your interior designs!