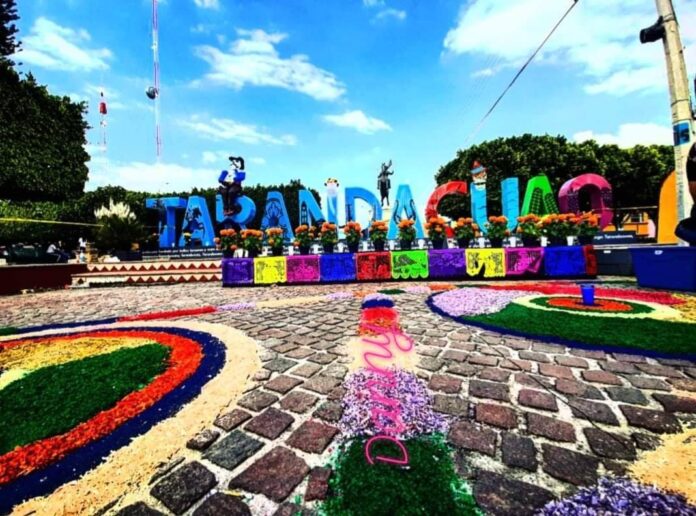 In the Southern Region of the state of Guanajuato, there is a municipality that enjoys great opportunities for nature, adventure, regional, gastronomic, religious, and artisan tourism, this place is Tarandacuao.

With the aim of favoring tourism in addition to triggering local commerce, in Tarandacuao various projects are carried out, an example of this is the “Parador Turístico Artesanal Taranda”.

In it, you will find ceramic products, mainly, and regional services; as well as the complex of Javier Servín’s Ceramic and Porcelain Workshop, which has cabins, gallery, restaurant, and gardens, located in La Purísima.

On the other hand, the “Artisan Ecotourism Project of the Sierra de Puruagua” is still under construction, but it is intended to be a new space for a Ceramics and Porcelain workshop.

In addition to these craft projects, Tarandacuao has emblematic sites such as its Historic Center, the Santiago Apóstol Church and the parish hall, the Paso de Ovejas Lagoon, and the Centude Tourist Center.

The Secretariat of Tourism of Guanajuato reported that it seeks to support each of the Tarandacuao projects in tourism, so Juan José Álvarez Brunel, head of the agency asked the service providers to formally make their requests.

“The intention is that we put Tarandacuao on the regional map, looking for a coordination (municipality, service provider and Sectur) so that tourists spend more time in Tarandacuao enjoying the services and cultural and natural attractions,” he said.

Among the requests of the Asociación Integración Mundo y Sociedad AC was included the request for the conformation of tourist signage for Tarandacuao and its attractions and access economic support for tourism development and festivals, which is granted by the Ministry of Tourism.

Before Easter, the carnival party is held in various places in our country, particularly in the town of Tarandacuao, a parade is held with masked men, who to the rhythm of the music dance, jump and make jokes with the spectating public. .

This festivity takes place on December 12, in particular in the town of Tarandacuao they perform mañanitas to the Virgin, masses, dances in the atrium of the church, fireworks and enjoy the typical snacks of the region.

This festivity takes place on October 4, in particular in the town of Tarandacuao it represents its patron saint, so they perform masses, dances in the atrium of the church, fireworks, music with wind bands and the installation of a popular fair with all its fun attractions.

In a particular way in the Parish of Santiago Apóstol, in the municipality of Tarandacuao, its inhabitants celebrate the celebration on October 25, with masses, dances in the atrium of the Parish and there is music with wind bands from the region.

The Chronicler of the municipality, Jaime García Ríos offers the following version of the toponymy of Tarandacuao: “… (in) some classic works of history and the Tarascan language, it was found that the word Tarandacuao means ‘place of ball game’”.

In pre-Hispanic times, Tarandacuao was a point of connection between the peoples that inhabited central and western Mesoamerica.

In the year 1472, Tarandacuao was subdued by the Purépecha state and belonged to the kingdom of Pátzcuaro, being King Hiquingare, Tariácuri’s nephew.

The town was founded by Tarascan Indians, acquiring the foundation legality on April 27, 1612 and is located in the southeastern region of the State of Guanajuato.

Tarandacuao is a population born from the Chupícuaro culture, one of the oldest in Mesoamerica, it extended from Tarandacuao through the Lerma river basin, to what is today La Piedad, Michoacán. Later the entire region was conquered by the Otomí culture. And later for the Purépecha culture.

The various groups settled in the region where Tarandacuao is found enjoyed a certain freedom because they were far from the centers of power in the Valley of Mexico, but some time later they were conquered by the nascent Purépecha State; whose formation process occurred approximately in the thirteenth century.

After the Purépecha control, the town of Acámbaro was considered a leading town that had 46 towns under its control, among which were:

“… Tarandacuao, Iramuco, Jerecuaro … and they served as a frontier against the enemies of the Cazonci, they paid tribute, they delivered vassalage, they made seedlings of mayz and other seeds, they worshiped idols of stone and wood to which they offered meals and that if in wars they caught someone they would sacrifice them in front of them … “

Arrival of the Spaniards

It is known that in the region that comprises Tarandacuao, the Spaniards did not found new populations but, rather, used pre-Hispanic populations of some importance (such as Maravatío and Acámbaro), from which they granted the encomiendas and undertook the conquest of other territories.

In the year 1521, upon the arrival of the Spaniards, the Purépechas and Mexica maintained great hostility in the intermediate territories (where Tarandacuao was). Otomi, Pames, Mazahuas and Matlatzincas inhabited the fortifications, who guarded the borders and joined the armies in times of war.

The first Spanish refounding of the region was that of San Francisco de Acámbaro in the year 1526, by Don Luis de Montañez, he is also credited with the conquest of Ucareo, the Maravatío Valley, the more modest towns such as Tarandacuao that are found subject to the head of Acámbaro.

At the same time that the conquerors arrived at the place, the Franciscan missionaries came with them, who began their activities from the main indigenous peoples that they called heads, where they established the parish churches and convents.

The Franciscans renamed the Indian towns, respecting their names but giving them the name of a saint of the Christian faith, for which he was called: Santiago Tarandacuao.

A deed of 1548, states that “the main and common of the town of Santiago Tarandacuao donates a site of minor cattle to the Virgin Santísima de la Concepción for her expenses.” Taking possession of said donation the vicar Fray Manuel, the butler and the prioste of the hospital.

The relative pacification of the region that occupies the Lerma river basin was reason for the increase of the Spanish interest in acquiring land grants in the region, with the distribution of land by the authorities taking off.

Colonization in the region took great steps due to the discovery of the mines in the north, the need arises to create roads to transport goods between Mexico City, Guanajuato and Zacatecas. In 1550, Viceroy Antonio de Mendoza ordered that in the province of Michoacán the repair and maintenance work of the Zitácuaro – Acámbaro route was carried out, this road had Maravatío and Tarandacuao as part of its route.

The congregation work was carried out in two periods:

The town of Tarandacuao, which was originally settled on the Ojo de Agua hill plateau, was transferred to the place known as El Plan, in the first period of the congregations, which was in charge of the friars of the Order of San Francisco de Asís. . A small church with a hospital for Indians was erected as ordered by the first Bishop of Michoacán, Don Vasco de Quiroga.

Many small populations were eliminated, on the other hand, towns in the region such as Tarandacuao, Acámbaro and Jerécuaro that had already been founded or congregated previously were chosen as places for Indian reductions.

The Franciscan religious, when starting their evangelizing work, took as one of their first actions to re-baptize the Indian peoples; Generally, the Franciscans respected the name that these towns already had, but they preceded it the name of a saint of the Christian faith, so that the new name of Tarandacuao was “Santiago Tarandacuao”.

During the colonial period the following words were used in civil and ecclesiastical documentation: Tarandaquao, Tarandacuaro, Taranducuau and Tarandacuao; the latter began to be used more frequently to remain as the definitive meaning.

Later, in the year 1861, the Congress of the State of Guanajuato changed the name of Tarandacuao to “Tarandacuao de la Constancia”; and later in 1949, also the State Congress when elevating the town to the political category of Villa, this on the occasion of the passage through this place of the President of the Republic Miguel Alemán, called it only “Tarandacuao”.

To translate video from a foreign language:

You’ll see that the subtitles have automatically been translated into English. While everything won’t be translated with 100 percent accuracy, the whole idea is that you can at least get a rough translation so you can easily follow along.