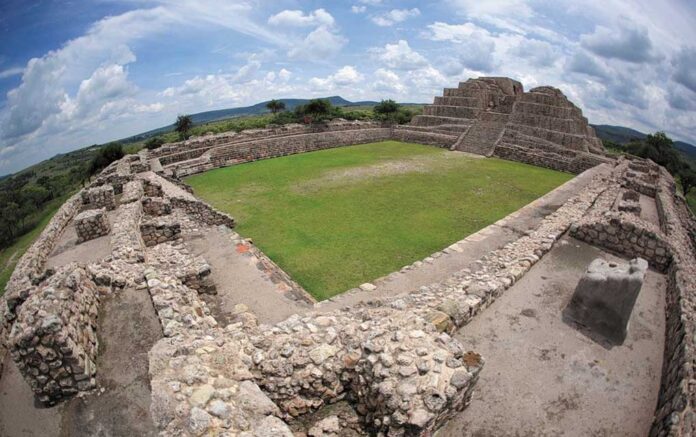 Until 2006, the mental portrait that most people had of Guanajuato invariably took the form of its colonial cities. However, on March 10 of that year Plazuelas, the first archaeological zone enabled to receive the public in the entity, was put into operation.

That act, which is now 15 years old, was more than the opening of a site with millenary vestiges: it meant a new way of understanding the history of Guanajuato and the seed of a successful model of management of archaeological sites, in which they participate collaboratively the three levels of government.

The opening of Plazuelas, in the municipality of Pénjamo, was followed by the archaeological sites of Peralta, in Abasolo (2008); Cañada de la Virgen, in San Miguel de Allende (2011) and El Cóporo, in Ocampo (2012), as well as the Arroyo Seco cave painting site, in Victoria (2018), which is just one of three of its kind open to the public in the country.

Thanks to the conjunction of efforts, in Guanajuato it has been possible to restart research on topics and regions that had been little studied, such as the bordering areas of Mesoamerica and northern Mexico.

Each of the archaeological sites opened in the entity generated a broad research and conservation project, the documentation of which is accessible through various books published by the INAH and the State Institute of Culture, the last of which is “The memory of the ancestors. The rock art of Arroyo Seco, Guanajuato ”, a publication signed by Carlos Viramontes and Luz María Flores that won the Alfonso Caso Award in 2018.

The archaeological investigations carried out thanks to this collaborative framework have provided information on the pre-Hispanic past of Guanajuato, with which some existing theories for the region are modified, such as the widely publicized proposition that this territory was only inhabited by nomadic groups. , generically called Chichimecas, that although it was the population that the Spaniards faced upon their arrival, they were not the only ones who inhabited these lands in more remote times.

The partial results of these investigations confirm the proposition that the groups that inhabited Guanajuato, especially before 900 AD, influenced the cultural evolution of the traditions of central and western Mexico.

The unique management model that Guanajuato has of its archaeological sites was built from the collaboration of the National Institute of Anthropology and History, the State Government, through the State Institute of Culture and the municipal governments, to generate a base source financing not only for the operation and conservation of the sites but also their dissemination and research work. This has been possible thanks to the Administration and Investment Trust for the Rescue and Conservation Activities of Archaeological Sites in the State of Guanajuato (FIARCA), formed in 2003.

Although the fundamental purpose of FIARCA has been the rescue and safeguarding of the archaeological heritage, once the archaeological sites have been opened to the public, they have been regional detonators that promote the social and economic dynamics of the host communities. In this way, it has also been possible to diversify the cultural and tourist offer in the state.

The archaeological zones of Guanajuato, which recently reopened to the public with sanitary measures consistent with the times of the pandemic, have not been static destinations. Its Visitor Service Centers receive temporary exhibitions that are frequently renewed and have been the setting for different events, such as astronomical observations, as well as craft and traditional cuisine fairs.