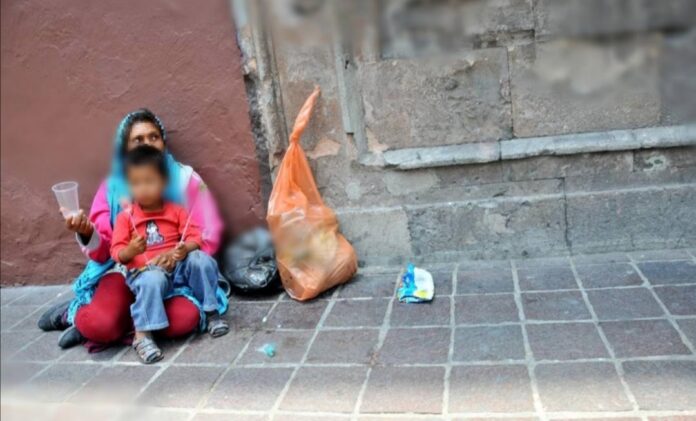 SAN MIGUEL DE ALLENDE, Guanajuato.- Up to 64 boys and girls between 4 and 16 years of age are those that the municipal DIF, in a coordinated work with the System for the Comprehensive Protection of Girls, Boys, and Adolescents (SIPINNA), has detected that they engage in unfair trade by selling artisanal items such as traditional wooden burritos or begging in the main streets of the city.

This situation has put municipal agencies on alert, which, for months, have worked to unravel this network, which has begun to show signs of possible human trafficking.

THEY ARE ABUSED BY ADULTS

In the central area of ​​the municipality, in recent years, the number of infants who sell handicrafts, sweets, or seeds has grown and at the same time ask for a coin, either for their passage or to eat, walking alone or in the company of other children.

The municipal DIF has begun an in-depth investigation to unmask what appears to be child labor abuse, since it should be noted that, after the investigation carried out by the System, led by Adriana Elizarraraz Sandoval, and the SIPINNA, it has been achieved detect that it is adults who take minors to the center of San Miguel de Allende to sell or beg.

“We have begun to generate brigades in the historic center and surrounding places, in order to diagnose, detect and document the children who have been found selling or marketing a product,” said the director of the DIF.

Only from August to September 2020, 53 girls, boys and adolescents were detected in these conditions; while from September to October of the same year there were 36; from October to December 64; From January to February 2021, there were 23 and from March to April, 30 minors were detected, related to the aforementioned activities, in the central area of ​​the tourist destination.

Adriana Elizarraraz stressed that many of these children are repeat offenders, since, when they see DIF staff approach, they hide or run.

THEY DO NOT ACCEPT SUPPORT FROM DIF

Despite the work that has been done for months, the director of the DIF remarked that so far no specific action has been highlighted with which it can be declared that this situation is considered human trafficking or child abuse.

“We are still documenting all this information that we have so that we can then take action and be able to pass it on to the competent authority, in this case, the Public Ministry. We as DIF, did during the first months of the pandemic, was to try to make them aware, that they are on the street and this means a health danger due to contagion issues, and they were invited to the DIF, to see in what way We could support or accompany them if they had any need; unfortunately of all the children and adults who intervened and urged them to come closer with us, none have come and we cannot force them to come ”, explained Elizarraraz.

THEY COME FROM OTHER MUNICIPALITIES AND STATES

It has been possible to detect that the boys and girls who ask for alms or sell a product come from other states such as: Oaxaca, Michoacán and Querétaro. And from municipalities such as: Comonfort, Celaya, León, Guanajuato, Dolores Hidalgo and even from San Miguel de Allende itself, but from communities such as: San Lucas, Peña Blanca, Don Francisco, La Presa de Allende and San Damián; those who come to the downtown area in the company of relatives or in groups led by one or two adults.

Elizarraraz explained that “all this we have already documented and now, we are practically, already looking for a way that the Public Ministry can accept these folders so that they can be the ones who carry out this investigation in a presumption of a crime of trafficking, which there could be ”.

THEY ASK FOR MONEY ON THE BASIS OF LIES: SANMIGUELENSE

The issue is not new for some San Miguel residents such as Lourdes Salas, who for several years has worked in commercial stores in the downtown area and said she witnessed how between two and three minors who are already well recognized have grown up begging in San Miguel de Allende, based on lies that change each season to get easy money.

“I have seen how they arrive in the public transport that comes from Comonfort, they get off at La Mega, there at the exit to Celaya, and they take off the new tennis shoes they bring and put on some old men, then they put on dirty pants on top of them that they bring and also change their shirt. The truth is that they ask for money for their passage and then you see them, asking for money to eat or even for their studies, and they ask for a newspaper, imagine how much they have to earn ”.

Given the fact that more than asking for help, it has become a business, the director of the DIF, shared that there are cases in which a mother arrives with several children in the historic center and they disperse to individually ask for coins. Therefore, and to continue integrating the work that has been carried out in conjunction with SIPINNA, Adriana asks the population for their support to report or generate evidence that can be sent to the DIF.

“Today we already have photographs and names, because even the children constantly change their names, but we do take care of the support of the citizens to be able to continue integrating the files, through their reports or evidence that they can send us. And perhaps we can also carry out a campaign to tell things how it is, that if we give them that coin it can make us accomplices of a crime that is possible trafficking; So let’s not give the coin, but rather let us denounce so that those who are committing this crime can be prosecuted and punished ”, concluded the director of DIF Municipal.

Renting of children, truth or myth?

To translate video from a foreign language:

You’ll see that the subtitles have automatically been translated into English. While everything won’t be translated with 100 percent accuracy, the whole idea is that you can at least get a rough translation so you can easily follow along.