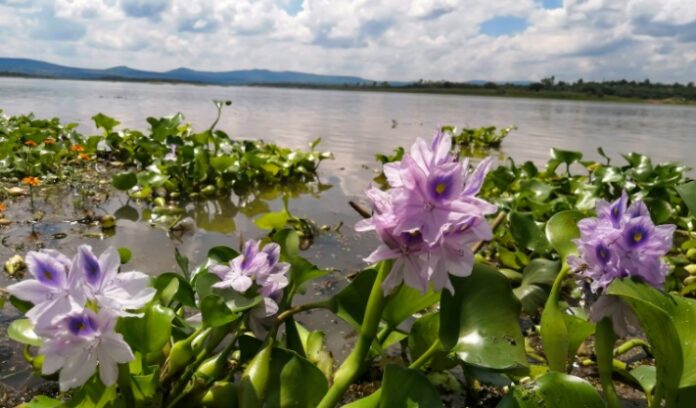 Following two years of heavy drought a green and purple mantle glides across the Presa, our large lake alongside town.  The lavender flower is the Water Lily.

The Water Lily is a floating plant native to the Amazon basin.  It arrived in Mexico thanks to Porfirio Diaz in 1887 starting a water element flower craze among the country’s wealthiest families providing a new home for one of the most invasive plant species in the world.

The Water Lily adapts to pollutants often run-off into the lake from nearby commercial agriculture sites for soybeans, asparagus, corn and broccoli.  Plus there is livestock excrement and pollutants from the hundred plus subdivisions being built between town and Atotonilco in our latest real estate hot spot.

On March 7 a harvesting machine was put into the lake (videos on YouTube).  The machine could remove all the present lilies in three years assuming they didn’t grow.  Granted, I went to a Catholic high school so my knowledge of science is scant, but I’m pretty sure all living things grow in size.  I know I do!

The Water Lily is just that, 95% water, and once not it water in dries out and dies, currently along the Presa’s banks.  Left in the water, it blocks sunlight to beneath the water-line fish and plants killing them.  With the wind, the Water Lily glides in all directions on the lake blocking boat access to fisherman.  Granted, I’ve no desire to eat the carp and what-not from the lake but many do and the fish are a mainstay for most lakeside fiestas.

Promoting the slogan “Presa to Mesa” (Lake to Table) virtually everything one can do with a fish is featured at the lake-side festivals as food along with music, dancing and boat races.

Years ago my then teens were agog over ATVs.  During one of our many outings I broke my arm while along the lake.  While my son zoomed off to get an ambulance my daughter explained it was okay if I passed out from the pain as she’d take water from the lake to pour on me and bring me back to consciousness.  Despite the pain I was clear headed enough to exclaim “Never do that!  Lord knows what Dr. House type diseases live in the lake from all the farms that border it.”

Years later, with my bionic arm firmly in place, I stand by that statement.  Plus for years I had fish from the Presa in my fountain.  They were ugly as sin itself but never needed an ounce of attention.  I’ve no idea what they ate but they reproduced with a speed bunnies envy.  They had to, as any passing heron that spotted them swooped in for the kill.  Those big birds terrified my dog!  And if I were honest, me too.

Other countries use the Water Lily for fertilizer but here we just want it gone.  On the glass half full side some believe the flower may one day be incorporated into the local production of bricks along the lake along with dung, clay and straw.  Fingers crossed!