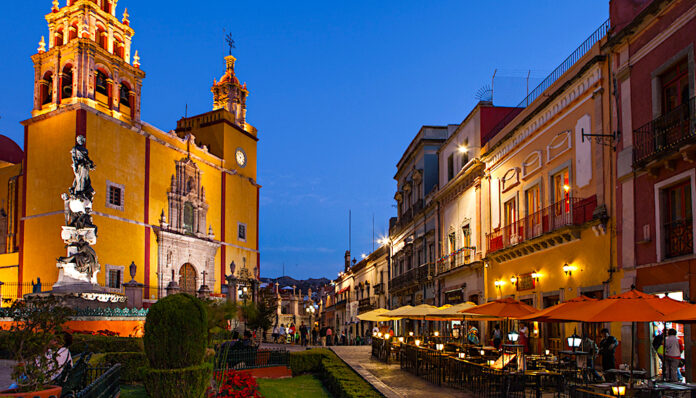 Guanajuato is a lovely tiny colonial Mexican city, painted in every imaginable colour with no delicate and complementing colour schemes, such as letterbox red, bottle green, or baby blue. In central Mexico, there are baroque and neoclassical structures with bougainvillaea on the doors. It used to be a thriving silver mining town. The quiet stroll through little alleys lined with pink jacaranda leaves, antique cathedrals, and churches gives the impression of being near to the residents. Guanajuato is also listed as a UNESCO World Heritage Site because of its extensive mining history as the world’s main silver extraction centre in the 18th century.

Surrounded by brown hills this mountain city always feels ready for the festival. Elevated on the height the houses feel like tumbling down the slope in beautiful colours. The city is true to Mexico portrayed in the movies. Expressly undergoing street performances, mariachi bands and a festive atmosphere which is itself a ‘youth’. Moreover, the university serves as the major attention as the streets flourish with emotions and excitement every evening with locals and youth participating.

In short, it would not be wrong to say the city of Guanajuato is a city rich in culture and art. It offers the ambience of slow travelling with a vibrant core. With major domestic tourists of Mexico, the city intrigues the travellers to open up more to the lifestyle of Mexico.

There is only one airport between Leon and Silao, the Bajio International Airport. It is located about 40 kilometres away from the city’s centre. A private automobile or taxi service is the sole option to get to and from the airport. It is due to the lack of dedicated public transportation reaching the downtown area from the Airport.

Bus service is quite reliable and comfortable. The luxury bus from the capital, Mexico city takes around 4 hours to the bus station of Guanajuato. Moreover, there are plenty of such buses which offer air conditioning or refreshments and run frequently.

You can either rent a car or taxi. The roads connecting the cities in Mexico are express highways with tolls. You can travel faster on road.

How to get around in the city?

Having a car, be it rental or own, offers access to places where public transport cannot travel. You can further take taxis in the city of Guanajuato. These are not metered but are based on the deal made with the traveller.

As the city is a mining zone there are numerous tunnels that have ends. If renting a car then keep in mind when and where to travel via tunnels.

Walking is one of the outstanding ways for venturing the city streets. Guanajuato city is not very big which makes it possible to explore every bit on foot. Additionally, riding up via funicular adds excitement.

Top 10 places to visit in Guanajuato

The tragic love story of the two balconies separated by only 69 centimetres is a home many visit. The story of Ana and Carlos being lost in love were killed by Ana’s father for pride. It brings us back to the tales of Shakespeare as they are also called Romeo and Juliet of Mexico.

The 28-meter tall statue overlooks the whole city of colours. Juan Jose Martinez is also known as El Pipila is the legendary hero who defeated the Spanish troops. Notably, you can reach the centre of the city by cab or go up the many stairs via foot or funicular to witness the statue.

Guanajuato is a mining town, with few mining centres that are still active and operating to the present. Hence a tour to visit the 35th World’s Heritage Site under UNESCO which made fascinating mining history in the town is a must.

There are several mines giving out educational and historical tours to signature features of half an hour. For example, Valenciana Mine is one of the most legendary silver mines. It was discovered back in the 16th century and was liable for yielding two-thirds of resources.

Cost to Valenciana Mine – $35 pesos + additional charges for pictures

Mummies aren’t only associated with ancient Egypt. Situated just outside the town on the northwest side is Mummy Museum. In 1910 due to overcrowding and the imposing of taxes on the local graveyard, the authorities were forced to exhume bodies. Later when the mummies were found the body looked extremely preserved. And on that note, this very strange and unique museum was founded.

The bustling market of local merchants selling souvenirs, handicrafts and local spices is as colourful as the city. Before the railway station was constructed which had now turned into a market with two sections. The indoor Gavira market serves Mexican cuisine and Gavira Square is a fabulous open-air market. Moreover, the bargaining skills stricken makes it more fun.

Those who like art won’t want to miss the birthplace of Diego Rivera. The house with his simple and socialist-inspired works has been lately reserved in the museum. Nevertheless take your time to understand the art, portraits stills, nudes and mural sketches by Rivera.

The Baroque-style church catches glimpse of the Virgin Mary’s time. Significantly giving out real cultural experience the yellow church rises above the town. On Sunday you can also attend mass. The church also looks beautiful lit up at night.

The public university offers more than 150 academic programs. Built in the 1940s the University building itself is ancient and stands out from the typical yellow-hued buildings of Guanajuato.

This garden of the union is a rectangular-shaped plaza in the heart of the city. Surrounded by lantern-lit trees and restaurants this place feels peaceful. The place promises night-long entertainment though the restaurants are fancy and costly.

The status known as Sanctuary of Christ marks the geographical centre of the country as a massive art decor statue. Significantly located on the top of a globe-shaped basilica the status has its arm spread wide and angels kneeling on either side.

Things to do in Guanajuato

Stroll in the historic town

The small city is fun to stroll through with historic pedestrian streets. Completely pedestrian-friendly with only a few cars and narrow streets this stunning town beside the mountainside is the best. Roaming and walking with a sense of discovery will let us know more about the architecture, charming surprises, and street activities. It will also lead to wandering into an elaborate network of tunnels.

Ride up to Funicular

The ‘fun’-icular is indeed fun. The dual red system is the most exciting way to get to the Pipilia monument look point. While the series of alleyways can also be used to walk up to the same point the funicular goes up. In addition, the inexpensive ticket price suggests taking one way to the monument.

The brown scorched hills are not exceptionally inviting in nature which makes hiking the less popular pursuit of fun trails. But the view is for adventurous souls. La Bufa is a spectacular trek that takes 3 hours roundtrip to pursue. However, the hike needs experienced hikers who could dive in to drool over the view of the mountain to the colourful city.

The trip to Guanajuato would not be complete without pausing at the ornate structure of the old theatre Juarez Theatre. Furthermore, this active theatre provides you with performance. We suggest getting concert tickers instead of self-tour entry tickets.

Stroll for the famous night walk

Callenjonedas is a nighttime tradition for over 50 years. The musical walk around the city lightens up like any other festival. Additionally, walking down the streets at the night makes it familiar with how people led their life and what they do for fun.

Dubbed as a university city, Guanajuato is a host to high-quality Spanish language schools. They offer lessons to both locals and tourists. So when in Guanajuato, why not come back with Spanish rolling down your tongue as a gift?

Is it safe for travellers?

Indeed Guanajuato checks everything for a safe stay. The small city spreads happiness and is welcoming to tourists from all the grounds. It is also safe to travel around the streets for a nice walk after dinner. The city of Guanajuato ensures a good stay with a festive atmosphere spreading joy and zest.

This Mexican city’s colourful streets, musical tours, and rich history make it an ideal place to visit while on vacation. Visit museums and historic silver mines during the day, then relax in the mountain city’s outdoor restaurants and pubs in the evenings. Get ready for an exciting city break in Guanajuato, Mexico; there are plenty of things to see and do!