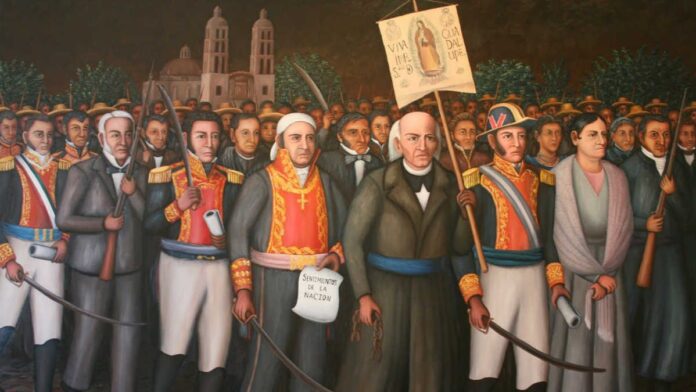 For Mexicans, September is the month of the country. And this is due to the celebrations of September 15 and 16. But what do we celebrate on these two days? On September 15, the traditional Cry of Independence ceremony is held, in which the beginning of the Fight for Independence is remembered, from the call of the priest Miguel Hidalgo y Costilla to arms.

Every September 15, millions of families come to the main squares and centers of the cities, as well as to the town hall buildings to commemorate another anniversary of the Cry of Independence.

What happened on September 15 and 16?

On September 15 we remember when the priest Miguel Hidalgo y Costilla summoned the town of  Dolores Hidalgo,  through the ringing of the bells of his church, to take up arms against Spanish rule.

Hidalgo called on the parishioners and the entire Mexican people to take up arms and fight against the “bad government.”

Although the Cry of Father Hidalgo took place on the morning of September 16, 1810, by presidential decree, we Mexicans celebrate it on the night of the 15th.

The book ‘El Palacio Nacional de México’ by Artemio del Valle Arizpe, recalls that ‘El Grito de Independencia’ took place until dawn on September 16, but by decree of President Antonio López de Santa Anna it was established that the commemoration would take place the night of September 15 ‘to avoid the fatigue of waking up early to celebrate the event’.

It was in 1845, President Santa Anna officially established the “Grito Ceremony” to remember the priest Hidalgo and the heroes who fought for independence. Establishing that it will be held every September 15 at 11:00 p.m.

Previously, in 1824, Mr. Juan Wenceslao Sánchez de la Barquera, during the presidency of Guadalupe Victoria, had the idea of ​​annually celebrating the anniversary of the beginning of the armed uprising against the Spanish regime, according to the website of the National Palace.

On September 16, the Anniversary of the beginning of the fight for Independence is officially commemorated, with a military parade.

The independence movement in Mexico concluded on September 27, 1821 with the triumphant entry of the Trigarante Army into Mexico City, led by Agustín de Iturbide and Vicente Guerrero.

Brief chronology of what happened before September 15, 1810

Although September 15 and 16 are the most celebrated dates, the movement for the Independence of Mexico began in 1808, when Miguel Domínguez resumed his duties as mayor of Querétaro, and ended in 1821, with the consummation and signing of the act of independence.

On December 21, 1809, the Valladolid conspiracy was discovered, whose leaders were Lieutenant José Mariano Michelena, Captain José María Gracia Obeso, Fray Vicente de Santa María and others. Ignacio Allende and José Mariano Abasolo manage to evade the action of the authority.

On August 31, 1810, Ignacio Allende informed Hidalgo of his projects and activities for the insurrection. On September 10, Captain Juan Arias denounced the conspiracy in Querétaro to Mayor Juan de Ochoa.

On September 14, Josefa Ortiz de Domínguez tells Ignacio Pérez that the conspiracy has been discovered and asks him to go to San Miguel el Grande to warn Ignacio Allende. At the same time, Mayor Riaño orders the arrest of Ignacio Allende and Juan Aldama, in San Miguel, and that of Miguel Hidalgo and José Mariano Abasolo in Dolores.

On September 15, 1810, the Mayor of Querétaro apprehended Miguel Domínguez and Mrs. Josefa Ortiz. In San Miguel, Ignacio Allende intercepts the warrant for his arrest and goes to Dolores. In Dolores, Miguel Hidalgo decides for the armed uprising.

On September 16, the armed uprising is carried out in Dolores led by Miguel Hidalgo; Ignacio Allende, Juan Aldama, and José Mariano Abasolo second him. In Atotonilco, Hidalgo takes as a banner the image of the Virgin of Guadalupe.