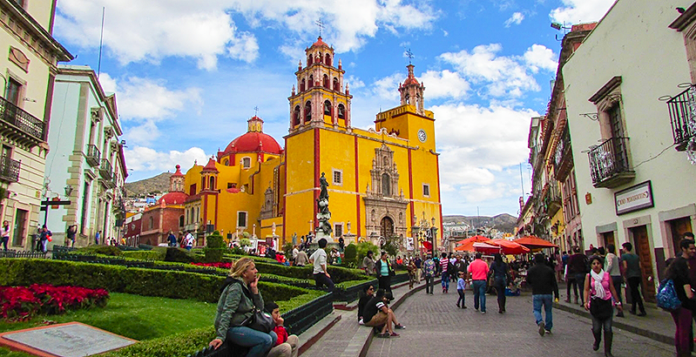 On the way to Guanajuato, that you pass through so much town”. It is a verse from the song of the legendary Mexican composer José Alfredo Jiménez. A corrido that already in the mid-twentieth century tried to summarize all the beauties hidden in this pearl of Mexican tourism.

And it is that the first image that comes to the head of the tourist when he thinks of Mexico is that of the beaches of Cancun, the jungle of Chiapas or the pyramids of Teotihuacán.

But among the main destinations in the country is the state of Guanajuato, an axis of the country’s colonial past, which in the 2021 edition of Fitur presents all its offers ready for the reopening of tourism in a summer in which the coronavirus pandemic begins to give in thanks to vaccination campaigns.

Juan José Álvarez Brunel, Secretary of Tourism of Guanajuato, points out 20 minutes later that the tourist offer of the state is wide: it goes from the great colonial capitals, classified as World Heritage, such as Guanajuato capital or San Miguel de Allende, to the magical towns (distinctive that is awarded in Mexico to unique locations), archaeological sites, wine tourism, and gastronomic routes.

“It gives us great pride to have such a vast land, with so much tradition, history, culture, so many references from those different times,” says the Secretary of Tourism.

Founded in 1557, the city of Guanajuato, capital of the state (the equivalent of an autonomous community) of the same name, grew with the impulse of mining during the Viceroyalty and was one of the most important capitals of New Spain.

This colonial strength has been preserved in the architecture of the city in such an optimal way that it was declared a Cultural Heritage of Humanity along with another neighboring city, San Miguel de Allende.

“They were references on the Camino Real de la Plata, the one that linked the cities of Zacatecas, Guanajuato, Hidalgo, and San Luis Potosí with Mexico City, where silver was taken to be converted into ingots and then brought to Spain”, he explains. the holder of Tourism.

The result is a city, Guanajuato, full of colonial buildings that have survived the passage of time, old tunnels, intertwined alleys, and alleys where the ancient legends of old Mexico can be combined with the current gastronomic and cultural offer.

In addition, the capital is home to the International Cervantes Festival, which each fall brings together scenic proposals around the figure of Cervantes,

Last year the pandemic caused the event to be only online, but this 2021 it will recover the face-to-face sessions in a “hybrid programming”, confirms Álvarez Brunel.

It also has five pre-Hispanic archaeological zones, which testify to the passage through the region of the Chichimecas, Cóporo, Arroyo Seco, Plazuelas, Peralta and Cañada de la Virgen.

And closely linked to this is tourism in natural areas, Álvarez Brunel points out that the state has a large reserve of protected areas where you can do adventure tourism, ecotourism or hiking activities.

But tourism, which represents 10% of the state’s GDP, is not the only powerful branch in the Guanajuato economy. Álvarez Brunel stands out in the development of the region in the wine industry and as a business center, as well as in other sectors where it has always been thriving, such as agri-food and textiles.

It also has in another large city, León, one of the most important centers in the leather and footwear industry.

“In addition, Guanajuato has evolved as an important producer in the automotive industry and that combination makes the state a very important place,” he adds.

This economic activity has made, for example, León a spearhead in business tourism and has fifth place in Mexico as a congress and exhibition center. A fairground of 85,000 square meters is also preparing to relaunch this type of event with anti-Covid measures.

Mexico, as in other countries, is making progress in its vaccination strategy (it is already ending the elderly segment and they are starting with that of adults under 60 years of age) and maintains restrictions against the pandemic, although not as severe as those that have been seen in Europe.

One of the measures adopted to guarantee the health security of the visitor has been the implementation of the Guanajuato Sano seal. “It is the sum of the good practices of all the tourism sectors so that they could be implemented in the places of services, hotels, restaurants, tourist transport, museums, shops, commerce in general”, says Álvarez Brunel

The guidelines have been implemented in 3,500 tourism companies. “Whoever visits us today will be able to see this stamp throughout the state that tells you that the necessary hygiene measures are available there.”

Another recurring issue that worries visitors is that of security in Mexico. Álvarez Brunel acknowledges that the country is going through a “complex situation”, but that Guanajuato, in coordination with federal authorities, has implemented concrete measures to make tourism feel “as calm as possible.”

Among these measures is that of a Tourist Police that constantly patrols the main roads in the region and reinforces municipal security. “There is a continuous presence, but without being invasive,” he explains.

Thus, Guanajuato seeks to be one of the references of Mexico in Fitur 2021. Colonial cities, magical towns, Chichimeca pyramids, Cervantes work …   “We are ready to receive them, ” concludes the head of Tourism.